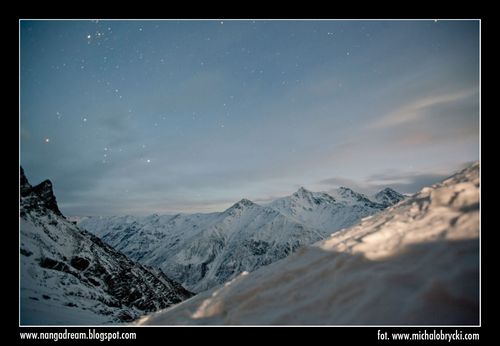 The winter climbing season on Nanga Parbat is proceeding at a good pace at the moment. The weather has finally improved and heading into the weekend, it appears that the teams should have an opportunity to acclimatize higher on the mountain. With just over two months to go in the winter season, the expeditions to the mountain have gone about as well as could be expected so far. Patience is the key to a winter climb on an 8000 meter peak, as the weather will truly determine if and when the climbers can proceed.

On Tuesday, the Polish Justice For All squad posted their first update in more than two weeks. It began with a nice message about the reality of travel in Pakistan, where many westerners have been led to believe that the people are hostile and unfriendly. That couldn’t be further from the truth and the Poles have had nothing but warm encounters with the Pakistani people. After 50 days in country, they report that they feel safe, welcome and lots of friendly feelings from everyone that they have met along the way. Far from what they had expected based on how the media portrays the country.

The rest of the report has given us a break down of what the team has been up to over the past couple of weeks, which essentially has been acclimatizing and shuttling gear up the mountain when the weather has permitted it. So far, they’ve been stashing equipment in Camp 1, and have gone a little higher, which has put them at approximately 5400 meters (17,716 ft).

The update also discusses the departure of Marek Klonowski, who is traveling home to be with his partner Ida as they prepare for the arrival of their baby in a few weeks. The team will obviously miss Marek, as he is described as being one of the main engines driving the expedition forward. His leadership means a lot to the group, who will never the less continue on without him. Marek has had four previous attempts on Nanga Parbat in the winter, and that kind of experience is hard to replace.

Also leaving Base Camp soon is Michal Dzikowski, who was on the expedition in a support role, helping the team carry gear. His allotted holiday time is just about up and he needs to return home to his job and normal life. His departure will drop the team down to four members, which will make it challenging moving forward, even though they knew he wouldn’t be there for the entire climb.

Fortunately, the Poles have a great relationship with the team they are sharing BC with. The North Face squad of Simone Moro, David Göttler and Emilio Previtali. The two groups have been sharing information about the weather and the route, and while they haven’t been coordinating their climbs directly just yet, I don’t think it would be a surprise if they joined forces for an eventual summit push.

Simone and David moved up the mountain last week, shuttling gear to C1 at 5600 meters (18,723 ft) and spending some time at altitude to acclimatize. They were warned by their meteorologist to be back in BC by Tuesday of this week, so they descended early to avoid bad weather. When they arrived back in Base Camp, the skies were clear and the weather was great, so they thought they may have made a mistake by descending. Later that evening, the skies clouded over and the snow began to fall, so they were glad for such accurate weather predictions.

Since then, the conditions have been dicey, but the forecast says things should begin to improve tomorrow. If that proves true, they’re prepared to head up the mountain and probably begin taking supplies to C2. They could possibly spend a few nights at that location this weekend, working in any chance to acclimatize that they can.

Finally, Daniele Nardi is expected to arrive on the mountain next week. He’ll be climbing the Diamir Route solo and in alpine style. Hopefully, we’ll get some updates on his progress once he gets settled in and starts his expedition.

Stay tuned for updates as we get them.