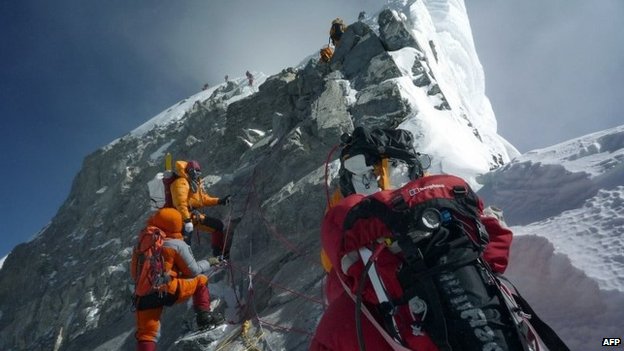 While we’re on the subject of Everest today, the BBC is reporting that the Nepali government has announced that it will have more security in Base Camp this spring in an effort to avoid further conflicts between foreign climbers and the Sherpas working on the mountain. The move comes after a brawl erupted on the mountain last spring that involved high profile climbers Ueli Steck and Simone Moro, which made headlines around the world.

According to the plan, there will be nine officers in BC, three each from Nepal’s army, police, and armed police force. They’ll open up a temporary office on the mountain in April in anticipation to the start of the new climbing season. These officers will work in conjunction with officials from the Ministry of Tourism, which have had a presence in Base Camp for several years.

Adding more security to EBC is probably a good idea, especially considering how crowded Everest has become in recent years. While last year’s conflict between the European climbers and the Sherpas was a bit of an anomaly, there are still other things they can police as well. I’m not sure how they can have an impact on the theft that routinely takes place at the high camps, during which equipment and oxygen bottles comes up missing, but if having the police on the mountain can act as somewhat of a deterrent, than this will be a good move.

Beyond that however, it may help to mitigate further conflicts, or at the very least, mediate them. While last year’s brawl was very unusual, it seems that exposed growing friction between the Sherpas and the foreign climbers. Those conflicts could boil over again, bringing even more of a black eye to the climbing scene there.

Lets hope that doesn’t happen however, and that the 2014 season will be notable for how quiet and uneventful it is.