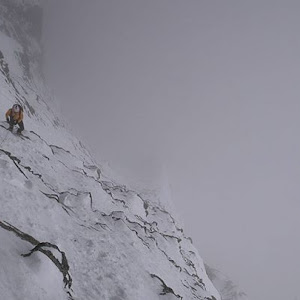 Yesterday, I wrote an update from Nanga Parbat that was filled with hope and promise for the climbers attempting to achieve the first winter ascents ever on that mountain. The teams on the Rupal Face were in motion, as they moved upward to get into position to take advantage of a possible weather window. But now, just 24 hours later, those hopes are dashed, with all climbers back in Base Camp.

The first time to go up the mountain was the Polish Justice For All squad. The Poles have a long history of winter climbing and they seemed poised to at least make an attempt at extending that legacy. When I last posted an update, they were in an intermediate camp between C1 and C2, with plans to go higher today and hopefully push to the summit tomorrow. Unfortunately, one of the members of the team has taken ill, and they were forced to abandon this push.

The North Face team was on the same trajectory, even though they left BC a bit behind the Poles. Simone Moro and David Göttler were sharing the same campsite yesterday and remained there, even while their companions elected to descend. But it seems that the weather window that they had originally hoped for has failed to open, and they too have now gone back to Base Camp. For now, there will be no summits.

It should be noted that while Nanga gets less technical on the upper slopes, mainly above C3, it is also far more exposed. With the high winds still in place, it would have made the final push to the summit very difficult. Temperatures are also extremely cold, and the risk was far higher than any of these climber were willing to take. This window was never a sure thing to begin with, so they’ll chalk it up to more acclimatization and now they’ll rest, remain patient and wait for better opportunity in the days ahead.

Over on the Diamir Face, we have received word today that Italian climber Daniele Nardi has completed his acclimatization with a successful summit of Ganalo Peak. He has now returned to BC as well, where we’re told he is comfortable and calm before the start of his ascent. He will also rest and watch the skies, waiting for an opportunity to launch his solo, alpine style attempt on the summit too.

Stay tuned for more soon. The winter is far from over and the climbers may yet get the chance they are looking for.