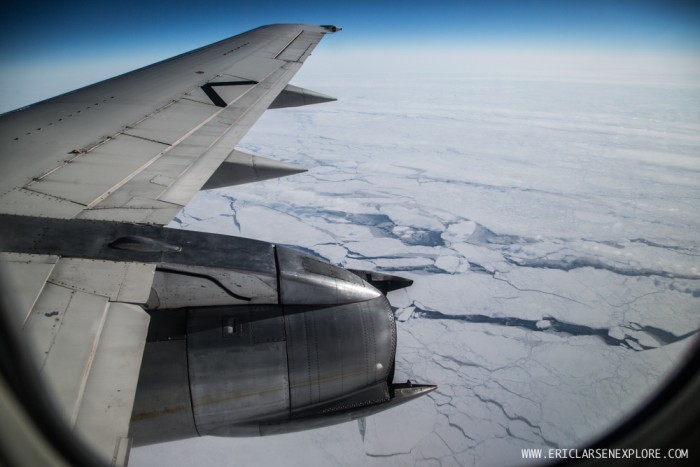 The 2014 Arctic expedition season will officially get under way today with the first teams being shuttled out to their starting point. Weather had delayed flights earlier in the week, but the window is now open and the explorers will start getting dropped off on the ice today. This will give teams a fighting chance at reach the North Pole, a feat that has been extremely difficult to accomplish in recent years.

Two teams will depart Resolute Bay for Cape Discovery today. They includes the Irish squad of Mike O’ Shea and Clare O’ Leary, who have been in Canada for a couple of weeks now, and have acclimatized  to the cold temperatures there while getting their gear ready for the start of the expedition. Mike and Clare’s Facebook page indicates that they have a confirmed flight out this morning and will be dropped at their starting point later in the day. They hope to reach 90ºN in approximately 50 days.

Also on that flight will be Japanese polar explorer Yasunaga Ogita. He’ll be attempting a solo, unsupported expedition to the Pole departing from Cape Discovery as well. That route covers approximately 780 km (484 miles), not accounting for negative drift. Yas is no stranger to the Arctic, although he would very much like to complete this journey.

Since today’s flight was already delayed from earlier in the week, Eric Larsen and Ryan Waters will have to wait until tomorrow or Sunday before they are dropped at their starting point on Cape Discovery as well. They hope to complete the route in just 49 days and as you can imagine, they are chomping at the bit to get started. For now though, the two men must remain patient, wait for their turn and watch the weather forecasts for a good time to fly.

Traveling in the Arctic presents a series of challenges that is very different than in the Antarctic. For starters, the explorers will have to battle negative drift the entire time. This is the phenomenon in which the piece of ice that they are camping on actually moves south, away from the Pole while they rest each night. This can be very frustrating for North Pole skiers, who may cover 15 km (9.3 miles) in a day of skiing, only to wake up the next morning do discover they’ve given 5 km (3.1 miles) back due to the drift. Unlike in the Antarctic, where the ice is covers solid ground, in the Arctic it floats above the ocean, which is why negative drift occurs in the first place.

Additionally, skiers heading to the South Pole face some challenging surface conditions with sastrugi creating all kinds of problems. That is relatively small potatoes compared to the massive ice blocks that occur in the Arctic when two massive sheets of ice smash into one another, creating a rubble field that can be agonizingly difficult to cross. Those blocks of ice are often as large as a car, and sometimes as big as a house. Thankfully, the rubble fields become less common the further north the teams move, but they can be very frustrating in the early stages of the expedition.

Those aren’t the only obstacles they’ll face however. They’ll also encounter large open areas of water as well, which have become more and more common due to global climate change. When they come across these open waters, they must determine if it is best to ski around them, or don a drysuit and swim across. this is again another time consuming process, which makes Arctic travel even more dangerous than in the Antarctic.

Finally, there is also the threat of polar bears. The large carnivores are always on the lookout for food and have been known to stalk those traveling to the North Pole. While an encounter with a bear is not uncommon, fortunately there haven’t been any accidents thus far. Still, most explorers carry a gun with them just in case. Usually it is meant to scare the bear away and not actually to kill it.

These are the conditions that our intrepid explorers will face as they set out on their journeys over the next few days. In the weeks ahead, we’ll be following their progress closely. Hopefully they all have good luck in the Arctic this season.