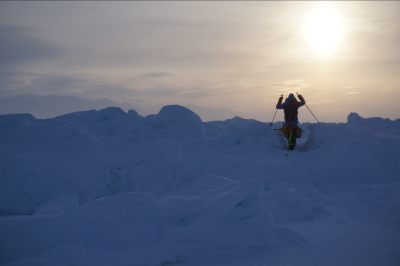 Now that two of the four Arctic teams have been evacuated due to injuries, the news from the north is a bit less hectic to report on. Those that do remain out on the ice continue to struggle with rough ice and generally poor surface conditions in general. And while the season is just getting underway, there are still miles and miles of frozen ocean to cross before they reach their goals.

The American team of Eric Larsen and Ryan Waters have now been out on the ice for a week, and the  two adventurers continue to fight their way through the rough ice zone. Yesterday they struggled against the elements and equipment failure, only to cover a single mile (1.6 km) through the nasty stretch that marks the start of their Arctic expedition.

For those who don’t know, this “rough ice” zone is the result of the breaking apart of the ice slabs that flat above the Arctic Ocean. When they crash into one another, it creates massive uplifts, with chunks of ice blocking the way. Those large pieces of ice are often the size of a car, some even get as big as a house. They make it impossible for explorers to ski through the area, as the surface is just littered with rubble. It can get so bad at times that they can only pull one of their sleds at a time, forcing them to cross the same patch of ice multiple times, just to make progress. It can be extremely frustrating and time consuming, which shows through a bit in Eric and Ryan’s dispatches at the moment.

Fortunately, the rough ice patch doesn’t last forever. This year it is about 15-18 km (9-11 miles) wide. That means that Eric and Ryan should hopefully put it behind them soon and start making real progress toward the North Pole. While the surface won’t be come smooth and easy, it definitely becomes more manageable. Thats what they’re hoping to reach in the next few days.

Meanwhile, Japanese solo-skier Yasu Ogita is a bit ahead of the Americans and making his way as best as he can. He has already cleared the rough ice patch and is making solid progress. Yasu is reportedly in good physical and mental condition, and while temperatures are bitterly cold, he is maintaining a steady pace. The early stages of an Arctic expedition are a bit of a war of attrition. The explorers must struggle for every mile that they get, with the hopes that it will eventually pay off once they get far enough north and conditions can improve. That is where Yasu is right now. Working hard for every bit of progress and holding firm for when things can improve. The further north he gets, the more distance he can cover on a daily basis. Right now, it is extremely tough to move forward at all.

Since it has been more than four years since anyone has completed a full expedition to the North Pole, I’m cheering on these two remaining teams. Hopefully one, or both, of them will reach 90ºN this year. Stay tuned for more updates in the days ahead. It is going to be a long season in the Arctic.