It has been a very busy couple of days in the Arctic, where things seemed to be going fine at the beginning of the week, but quickly turned sour yesterday. After finally getting all of the North Pole teams out on the ice, two of them had to be evacuated, leaving just two others to continue on this season. This news is another reminder that a journey on foot to the North Pole may be the most difficult challenge left in the world of adventure. 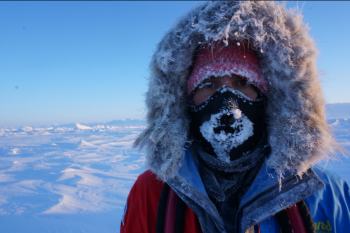 On Sunday, both Mike O’Shea and Clare O’Leary both suffered injuries when a large block of ice they were moving over shifted. The duo were lowering a heavy sled at the time, and the unexpected movement resulted in the sled falling on them, injuring Mike’s back and Clare’s knee in the process. The Irish explorers were scheduled to get a resupply on Monday, but the plane scheduled to drop off the food and fuel extracted them from the ice instead. They are now back in Resolute Bay and preparing to head home to Ireland.

Meanwhile, we have also received word that the Norwegian team of Lars Flesland and Kristoffer Glestad were also evacuated from the ice on the same plane that picked up Mike and Clare. The two men had been making solid progress through the rough ice patch at the start of the expedition, but on Sunday extremely cold weather (-47ºC/-52ºF) caused their feet to get cold, even inside their thermal boots. When they examined their feet in the tent that evening, they discovered frostbite had already begun to set in, and by Monday morning it had gotten worse. Their home team immediately called for an evac, while Lars and Kristoffer skied back south to their starting point. They are also back in Resolute Bay and preparing to head home.

Elsewhere, Eric Larsen and Ryan Waters continue to battle the rough ice on their way north. They are netting relatively short distances right now as they haul one sled at a time through the very difficult region that marks the start of all expeditions to the North Pole. As a result, they are covering just 1.5 nautical miles (2.7 km) per day. Hopefully they’ll clear the rubble zone soon and begin to pick up some speed, but at the moment, they are facing blocks of ice that are 3-4 meters in size, which are impeding their progress greatly.

Finally, Japanese solo-skier Yasu Ogita is pushing north as best he can. He seems to have cleared the rough ice and is making solid progress at roughly 6 km (3.7 miles) per day. His home team reports that he is feeling good both mentally and physically, and that conditions are about as good as he could expect them to be at the moment.

Fortunately, no one on the Irish or Norwegian teams was seriously hurt in their attempts, and hopefully that trend will continue throughout the rest of the season. With just two teams still out on the ice, we’re looking at an uphill battle to have anyone complete the full distance to the North Pole this year. I won’t bet against any of the three explorers who are still attempting to reach 90ºN, but it certainly won’t be easy for them to accomplish their goals.