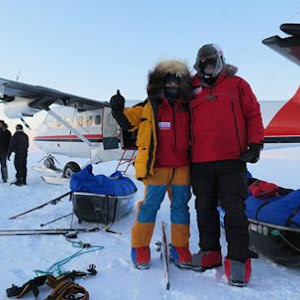 The 2014 Arctic expedition season is just underway with two teams out on the ice and starting their way north. But, as expected, it has been tough going so far with bad weather and poor surface conditions slowing progress. Meanwhile, two teams sit in Resolute Bay, wondering if they will ever get the chance to get started.

The Irish team of Mike O’ Shea and Clare O’ Leary were dropped off on Cape Discovery last Friday and have been making slow, but steady progress on their route to the North Pole. They’ve been covering approximately 5 km (3.1 miles) per day as they work their way through the region of rough ice that permeates the start of the route. That area is filled with massive ice boulders that are created when slabs of arctic ice smash into one another. Those boulders can be massive in size, and going around or over them while pulling a heavy sled can be extremely difficult. Fortunately, Mike and Clare hope to clear the ice field in another day or two, and hope to make up some ground once that happens. They’ve also been battling blizzard conditions early on, which hasn’t made progress easy either.

Japanese solo explorer Yasunaga Ogita is struggling through the same massive ice field on his way north too. He tells ExWeb that he has been forced to travel west to try to skirt around the rough ice, and is now covering about 4.5 km (2.8 miles) per day. He reports that the weather has been good so far, he just needs to get past the large blocks of ice that are impeding his progress. Yasu, who is a veteran of the Arctic, says that he has never seen conditions like this before, but he is hoping to find a way through to the smoother ice on the other side.

Meanwhile, back in Resolute Bay, Eric Larsen and Ryan Waters continue to wait for a flight out. They had hoped to start skiing this past weekend, but bad weather has kept them grounded for now. There is no word yet on when they might start on their North Pole expedition, but they are watching the forecasts closely and hoping to get started soon. Each day they sit in Resolute is one that is lost on their already tight schedule.

The Americans aren’t the only ones who are eager to get started. The Norwegian team of Lars Mangerud Flesland and Kristoffer Glestad are also playing the waiting game. They hope to fly to their starting point on Cape Discovery too, in an effort to launch their unsupported expedition to the North Pole. If successful, they’ll be the youngest team to complete that journey at 25 and 24 years old respectively. First, they need to get out on the ice however.

Finally, ExWeb is also reporting that the RAF team of Matt Stowers and Kev O’Brien have abandoned their attempt to ski to the Magnetic North Pole after a failure to their communications equipment. They had departed from Resolute Bay on March 3, and are now en route back to that point.

Each of these reports is typical for the start of the Arctic season. Some teams are lucky enough to get out on the ice and get moving, but now they hope they can actually make progress toward the North Pole. Meanwhile, others sit in Resolute Bay just hoping for an opportunity to go. In recent years, some of those teams were forced to cancel their expeditions before they even got started, as bad storms prevent them from being flown out to the ice. As the days tick away, their window of safety gets more narrow, eventually not leaving them with enough time to reach the Pole before the season ends. Lets hope that doesn’t happen again this year. I’d like to see each of these teams get a real shot at achieving their goals.