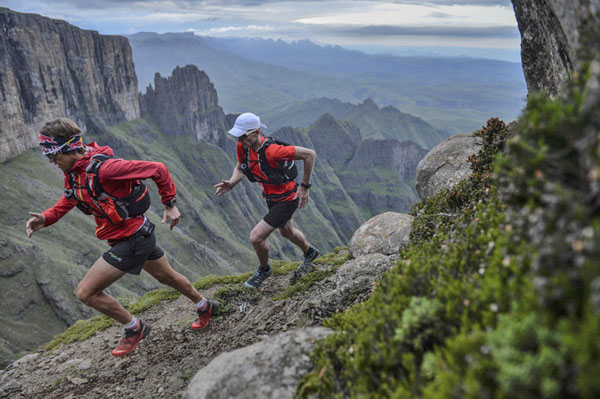 The Drakensberg Grand Traverse is a challenging hike through a tough stretch of the Drakensberg Mountains in South Africa. The trail covers approximately 220 km (136 miles) and takes most hikers anywhere from 6 to 10 days to complete. But at the moment, two ultra-runners are attempting to set a new speed record on that trail, as they hope to cover it end-to-end in less than three days.

Ryan Sandes and Ryno Griesel set out on their speed attempt yesterday. Departing from the Sentinel car park in the north, and running south toward the Bushman’s Nek Border, they  hope to beat the previous record of 60 hours, 29 minutes, 30 seconds that was set back in 2010 by Griesel and teammate Cobus van Zyl. After weeks of scouting the route and preparing for the run, Ryan and Ryno feel that that time seems not just within reach, but fairly very beatable, as the two extreme athletes have told others that they are actually aiming at a time closer to 40 hours.

The route, which is mostly unmarked, covers some very difficult terrain. The trail is wanders up and down the dramatically shaped Drakensbergs, offering rocky ravines, edging peaks and plenty of climbing and descending. In fact, the two men will climb approximately the same height as Mt. Everest over the course of their two days on the trail. They’ll also have to cross alpine grasslands and wet marshlands along the way.

If the terrain wasn’t enough of a challenge, the weather could prove difficult too. There has been a lot of rain in the region lately, and while snowfall is limited in March, a freak blizzard would not be unheard of. Heavy mists and fog could slow them down as well. Considering they’ll be spending much of their time above 2800 meters (9186 ft), the thin air could prove difficult to run in as well.

Ryan and Ryno are running the Grand Traverse completely self supported, meaning they are carrying all of their gear and supplies with them as they go. As of this writing, they are well ahead of the record pace from 2010, although there is still a very long way to go before they are through. You can follow their progress on the DGT’s officials website, which has lot more information about the run and the two men attempting it.

Good luck to Ryan and Ryno and big thanks to my friend Lisa for sharing this story with me!