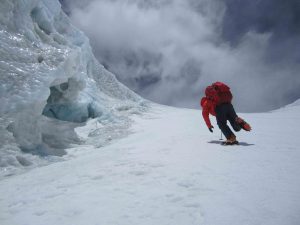 With the South Side of Everest shut down, the news from the Himalaya will be a bit more sporadic and quiet as compared to other years. But now that the shock of the events that occurred on the Big Hill has started to wear off, everyone is getting back to work on the various 8000 meter peaks across the region. The season is still progressing, and there is much to report, even if it doesn’t involve the tallest mountain in the world.

On Makalu, a summit push is underway. Mike Horn and Fred Roux set out from ABC yesterday, and hope to make camp at 7500 meters (24,606 ft) today. Once there, they plan to rest for a day, before continuing up to 8000 meters (26,246 ft) on Thursday. If they reach that point, they’ll rest again, then make an attempt on the summit this weekend. Stay tuned for progress reports.

Also on Makalu is Chris Jensen Burke, the Australian climber who is tuning up for K2 this summer. Her most recent dispatch was from Advanced Base Camp last week, where she and her team were waiting for the weather to clear. They had just completed their Puja ceremony, and were preparing for their first rotations up the mountain as they began to acclimatize. She also touched on how the tragedy on Everest had impacted the Sherpas on her team as well.

Jumping over to Cho Oyu, Matt and Mike Moniz have been acclimatizing above Camp 1, where they are making solid progress. Daily storms have been hitting the mountain in the afternoon, but otherwise the acclimatization process has been going as smooth as possible. Their initial plan was to top out on Cho Oyu, located in Tibet, then move back across the border for an attempt on Everest and Lhotse. Obviously those plans are now changed after the shift in climate on the South Side.

Over on Kangchenjunga, the team of Denis Urubko, Alex Txikon and Adam Bielecki have started acclimatizing for their attempt at a new route along the North Face. Once fully prepared, they’ll attempt an alpine style accent, without the use of oxygen or Sherpa support. The 8586 meter (28,169 ft) mountain is the third tallest in the world, and a considerable challenge along standard routes. Attempting a new route is one of the boldest climbs we’ll see this spring.

ExWeb has posted brief updates from several Himalayan peaks, including Annapurna. They report that Norwegian climber Tore Sunde-Rasmussen came within 1000 meters (3280 ft) of the summit, before turning back this past weekend. He has now left the mountain and is on his way back home. Conditions are said to be difficult and dangerous again on Annapurna this spring, which is a notoriously difficult climb under the best of conditions. Last year, it was so bad that no one reached the summit during the spring season at all.

Also, Horia Colibasanu and Peter Hamor are currently back in BC following an acclimatization rotation on Shishapangma last weekend. They’ll make a push up to Camp 3 in the next few days, weather permitting. They had intended to use Shisha as a warm-up for Everest, which they had hoped to do sans bottled oxygen. Now, they’ll hope for a summit here, before going home.

That’s a rundown of some of the things happening in the Himalaya at the moment. Watch for more updates in the days ahead.