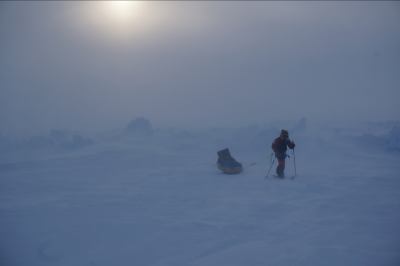 Another week has nearly passed in the Arctic, where two lone teams still push towards the elusive North Pole. It is still a long way to go before they reach 90ºN, but at least one of those teams is hitting its stride at last, and as a result, they’re also gaining in confidence as well.

Just a few days ago, Eric Larsen and Ryan Waters were facing not only rough ice, but thin ice as well.  When they weren’t spending the majority of their time covering the same ground, as they pulled their two heavy sleds, individually, they were worrying about open leads and trying to avoid falling into the frigid Arctic Ocean. Unfortunately, that fate befell Ryan on two separate occasions as he attempted to follow Eric across the fragile ice.

But since then, things have started to improve for the two polar explorers. Yesterday they report that they covered 7.64 nautical miles (14.1 km), which is their best day yet. That is the kind of distance that they expect to be covering if they actually want to reach the North Pole in a timely fashion. Better yet, it seems that the ice is smoothing out at long last, which means they can pull both sleds at the same time, get into more of a rhythm, and start making serious progress at last.

The question now is, is it too late? They still have 415 miles (667 km) to go to reach 90ºN, and the two men have been out on the ice for 20 days already. When they set out, we knew that they had packed enough food and fuel for 55 total days. That means, over the remaining days, they need to average approximately 11.8 miles (19 km) per day, to reach the Pole before they run out of supplies. Considering the conditions that they’ll continue to face, not to mention having to deal with negative drift, that is a tall order. But it isn’t impossible. The further north they travel, the easier the conditions will be. Temperatures will continue to drop, and high winds will still be an issue, but the ice beneath them will get more solid and smoother as well. That will make it easier to cover the longer distances they need to reach their goal. We’ll just have to see if they still have enough time on the clock to get there.

Elsewhere, ExWeb is reporting that Norwegian polar guide Bengt Rotmo intends to ski in the opposite direction of Eric and Ryan. He’ll first guide two separate groups of clients on last degree expeditions to the North Pole, before he will make a solo journey from 90ºN to Canada. Rotmo should have arrived at the Barneo Ice Camp yesterday, and will embark on the first last degree journey in the next day or two. He’ll then go back to Barneo for the second group, before setting off on his own expedition.

That’s all for now. The Arctic season is far from over, so expect more updates soon.