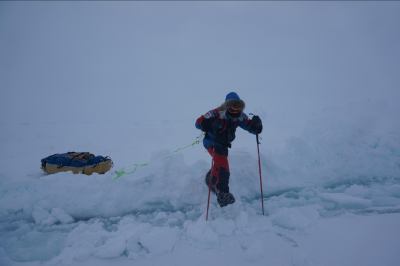 Just a few quick updates from the Arctic to get things started this morning. First off, the Barneo Ice Camp officially closed on Tuesday, as the final travelers and researchers were picked up from the ice and began their long journeys back home. The temporary camp, set up annually a degree off the Pole, served its purpose well this season, allowing numerous adventurers to come and go from the Russian side of the ice. A new camp will be built next spring to continue support efforts in the Arctic once again.

One of the final people to leave the North Pole this season was Norwegian explorer and polar guide Bengt Rotmo. He’ll now ski south on the Canadian side of the planet, making his way towards Cape Discovery on Ellesmere Island. He began his journey on Monday, and will spend the better part of the next 6-8 weeks in the Arctic.

He’ll be heading in the same direction as the Expedition Hope team, who have a few weeks head start, and are making good time, but have had to battle very poor weather at times. Starting at the North Pole is easier than ending there, but skiing to Canada is still a big challenge.

There hasn’t been any word yet on whether or not Yasu Ogita has been retrieved from the ice. The solo-skier had called for extraction last weekend, but poor weather left him tend bound while he waited for a flight to come pick him up. That flight may have happened yesterday, but we’re still waiting on confirmation. After 45 days on the ice, it was clear that he wouldn’t have enough food nor fuel to reach the Pole, so the veteran polar explorer was forced to abandon his expedition once again.

Eric Larsen and Ryan Waters don’t appear to have any plans on pulling the plug on their North Pole expedition, and they are slowly but surely inching closer to the Pole. Today marks their 40th day out on the ice, and they will pull within 200 miles (321 km) of the goal. They are carrying enough supplies for about 15 more days in the Arctic, but considering they are still facing extremely poor conditions, the success of their expedition is still up in the air. They are covering longer distances at last, but with just over two weeks to go, they’ll still have to average approximately 13.3 miles (21 km) per day. Coincidentally enough, that is exactly how far they travelled yesterday.

Finally, over in Greenland, Dixie Dansercoer and Eric McNair-Landry  are now two weeks into their attempt to circumnavigate the country by kite-ski. The weather hasn’t been particularly cooperative so far, as a result, they aren’t covering the miles that they would like to at this point of the journey. They are remaining patient however, and hope to make up for lost time as conditions improve. They have been tent-bound for the past few days while they wait out a storm, but are anxious to get back on track. Considering this is a 5000 km (3106 mile) journey, that could last up to 80 days, they still have time to make up ground. But they are also aware that the clock is ticking, and they need to get moving soon.

That’s all for today. More updates to come soon.