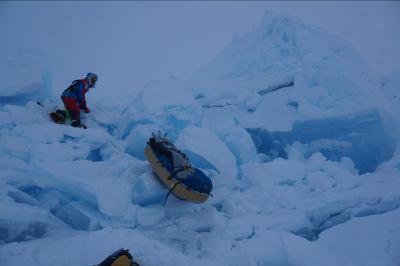 It has been a few days since I shared any updates from the Arctic, mostly because there hasn’t been much new to report. The teams headed to the North Pole are skiing along as best they can, making slow, but steady progress towards the top of the world. The weather and surface conditions still dictate what is possible, and will continue to do so right up until the end. Meanwhile, the Barneo Ice Camp has been open for business for a week now, with explorers, travelers, and researchers filing in and out. The clock is certainly ticking on the season, but there is still time for these adventurous souls to accomplish their goals for this year.

The American team of Eric Larsen and Ryan Waters continue to battle difficult ice on their attempt to ski to the North Pole. They’re dealing with large fields of ice blocks at the moment, which Eric describes as ranging in size from as small as a soccer ball, to as large as a washing machine. This is making it very difficult for them to haul their sleds across the ice. They struggled early in the expedition with rough ice, and had hoped to have put those conditions behind them, but these fresh obstacles are making for slow progress once again.

Yesterday, the duo managed to cover 7 nautical miles (13 km), which is up from the early days of their journey, but well below what they would like to be accomplishing. As of now, they still have more than 370 miles (595 km) to go until they reach 90ºN, and now that they are 25 days into the expedition, they are rapidly approaching the halfway point in terms of food and fuel. When they set out from Cape Discovery, they had enough provisions to last 55 days. By the end of the week, they’ll have used half of those supplies, and will still have 350 miles to cover before they are done.

Elsewhere, yesterday I posted about Dixie Dansercoer and Eric McNair-Landry’s attempt to circumnavigate Greenland by kite-ski this spring. The 5000+ km (3106 mile) journey is expected to take up to 80 days to complete, once they get underway. The boys continue to experience delays, and were unable to fly out their starting point once again yesterday, thanks to poor weather. They’re keeping themselves entertained and occupied while they wait, but both are eager to get started with this long distance journey.

Finally, you can get updates from the Barneo Ice Camp courtesy of its Facebook page. Regular postings keep us informed of the comings and goings from the temporary gateway to the North Pole, that is built each year on a floating slab of ice. Of particular interest are the coordinates that are shared on a daily basis. This will give you an idea of how much negative drift can come into play on an expedition to the Arctic, as the camp’s location is slowly, but constantly, shifting.

Barneo has been the staging area for well heeled adventure travelers who are skiing the “last degree” to the North Pole, but it also a place where researchers can come to measure changes in the Arctic ice and observe environmental conditions there. The base also serves as an exit point for explorers heading to 90ºN, and it is an emergency search and rescue station should the need arise. The camp will remain open for another couple of weeks.

That’s about all for now. The North Pole teams are in a real grind at the moment, so there isn’t much to report. Hopefully conditions will improve soon and they can begin to pick up speed. There is still a lot of ground to cover, and the clock is constantly ticking.