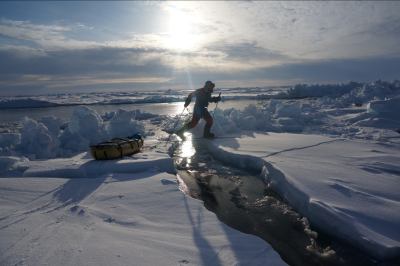 Just a quick update from the Arctic today to give you a progress report on Eric Larsen and Ryan Waters. The two Americans have been out on the ice for 47 days now, and it is beginning to appear like they will accomplish their goal of reaching the North Pole, covering the full distance from Cape Discovery in Canada. If they do accomplish that, they’ll be the first to do so in over 4 years, and while they still have some distance to go, their target is in sight, and it looks like it would take something catastrophic to prevent them from finishing now.

Updates have been sporadic over the past few days, mainly because they are skiing more hours in an effort to cover more ground. Right now, they’re skiing 12 1-hour shifts per day, and sleeping just 4.5 hours. As you can imagine, this schedule is taking its toll on the explorers and their equipment. But, these extra hours are paying off, as they are now hitting 18 nautical miles (33 km) per day, which is what they need to cover in order to reach the Pole before they run out of supplies.

As of this writing, they are now 102 miles (163.9 km) from the North Pole. They have crossed the 88th degree, and are now rapidly closing in on 89. At their current pace, that would put them at 90ºN early next week. From the sounds of their audio dispatches, they’ll be limping into the finish line. Much of their gear is being held together by makeshift repairs, following the abuse it has taken on the way to the Pole.

It is difficult to convey just how big of an accomplishment Eric and Ryan are about to complete. For my money, traveling to the North Pole remains the toughest challenge in the world of adventure today. The fact that no one has done it for so long underscores that. I also continue to believe that due to climate change, it’ll only get more difficult to ski to the North Pole in the future.

I’ll post more updates as they approach their end point. Hopefully there won’t be any issues with extracting them from the ice. Only a few more days now.