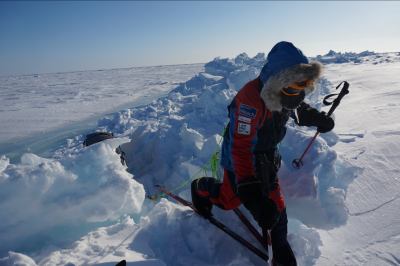 After 53 days out on the ice, Eric Larsen and Ryan Waters accomplished their goal at long last. The American duo reached the geographic North Pole last night, ending a four-year drought for anyone completing that journey on foot. The final push came in early evening, with the men arriving at 90ºN at about 7:50 PM Pacific Time. And while the final section to the actual Pole was smooth going, the last day of the expedition was anything but.

According to the audio dispatches that were released yesterday and today, the final push to the top of the world was incredibly grueling, with the explorers facing everything from rough ice, to large open leads, with whiteout conditions thrown in for good measure. In one of the dispatches, Eric says that it took them more than 8 hours just to cover a 3.5 mile stretch of ground. During that phase, they were skiing when they could, but had to resort to crawling, and swimming at times.

Eventually, they came across a section of flat, relatively smooth ice, that stretched before them unbroken. They knew that they were close to the Pole, with Eric remarking that for the first time since the start of the journey, there were no major obstacles in their way. It took a bit of navigating to locate 90ºN, but once they did, they celebrated briefly, took some pictures, and then crawled into their tent for a rest. In his dispatch, Eric said that they are utterly spent. The amount of effort it took, particularly in the final days when they were racing the clock, has left them completely exhausted.

The expedition was originally scheduled to last 45 days, but knowing that traveling in the Arctic is a difficult, unpredictable affair, they packed food and fuel for 55 days. That meant that they were able to complete the journey completely self supported, and didn’t have to call in a resupply. With two days food left to spare, they can now rest for a bit before a flight can be arranged to pick them up. Extraction will come as the weather permits. A few days ago, the forecasts indicated that storms were possible in the area, so while they boys have reached their goal, they are not on their way home just yet.

Both Eric and Ryan are veterans of travel in the colder regions of our planet. In his last dispatch, Eric mentioned that things are changing dramatically in the Arctic, and the ice there is now unlike anything he has ever seen before. Climate change is having a dramatic effect on the Poles, and soon it may be impossible for anyone to complete this journey to the top of the world. In my opinion, it is already the toughest undertaking in the world of outdoor adventure, and considering the fact that no one has done it since 2010, I think it is only getting more difficult. It may not be too many more years before it is simply impossible to travel on foot the full distance to the North Pole.

Congratulations to Ryan and Eric on the successful completion of their expedition. Their efforts in the Arctic are an inspiration to many of us who have been following their progress for weeks. Hopefully they’ll be on their way back home soon. I think they’ve earned themselves some much deserved rest, and perhaps a little time on a warm beach somewhere.