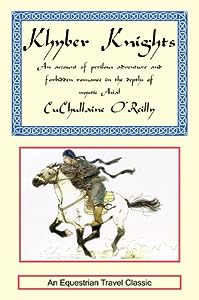 Looking for an enthralling book filled with high adventure to keep you entertained this summer? Then consider picking up the incredible Khyber Knights by CuChullaine O’Reilly. It is a book filled with daring feats, epic challenges, and tales of human frailties, both good and bad. It is a story of travel on horseback through one of the most remote, and rugged, regions of the world, during a time of war. It offers insights into a culture that is mysterious and little known here in the west. And best of all, it is a fictionalized account, of a true story that will leave you breathless as you turn every page, until you reach the very end.

Originally published in November of 2001, Khyber Knights has become a classic adventure book. It is an account of the authors travels through the Peshawar region of Pakistan back in the early 80’s. Situated along the border of Afghanistan, Peshawar saw plenty of overflow from the war that was raging in that country between the Afghani freedom fighters – the Mujahideen – the might Soviet Army. Peshawar was already a place that few foreigners would dare to tread, but it was made all the more dangerous thanks to the geopolitical struggle that was playing out just next door.

After visiting Afghanistan himself, O’Reilly converted to Islam, then made a pilgrimage to the holy city of Mecca, before launching his equestrian journey through Pakistan. His travels would take him deep into the northwest region of that country, and through the heart of the famed Khyber Pass. Along the way, he would have many encounters with local tribesmen, visit some unbelievable remote places, and risk his life on numerous occasions. Out on the trail, he would meet a host of larger than life characters that readers will have to remind themselves are actually real. He was beaten, kidnapped, thrown in prison, and yet he still managed to find a way to press ahead with his exploration. This story is a true testament to strength of the human spirit.

This is a book that will grip you from the very beginning, and have you turning the pages just to find out what happens next. It is a story that is told in a sometimes brutally honest fashion, but in a way that is also endearing. O’Reilly doesn’t pull any punches in his honest depiction of a part of the world that is entrenched in Islamic fundamentalism, and steeped in archaic traditions. Some of the things that he saw would eventually lead to the current situation in Pakistan and Afghanistan, where the Taliban hold great sway, and religious dogma has a deep impact on the daily lives of the people that live there.

I’m a sucker for wonderful illustrations and maps, and Khyber Knights has plenty of those. Readers will delight in how these images enhance the tale, and give us a better sense of the place that O’Reilly was exploring three decades ago. More over, the glossy, high quality pages of the hardback version of this book give it more of a feeling of a work of art, rather than something that you’ll just want to put on your bookshelf and forget. It is clear that it was crafted with great care, both by the author and the publisher, and it is a tome of exceptional stature.

One of the truly remarkable things about Khyber Knights is that the tale that it tells took place 30 years ago, but it still holds plenty of relevant insights and information for readers today. It offers us a look at a part of the world that is generally misunderstood here in the west, and often misrepresented by the media. This is a first hand account of the people that inhabit the Peshawar region of Pakistan, and while time has certainly passed since O’Reilly made his great expedition on horseback, not a lot has fundamentally changed for those who live in that region. They are still caught up in a struggle between powers that are greater than them, and yet they still resist those challenges.

At 658 pages in length, this is a book that will keep you busy for awhile. It will enthrall you with its daring tales of adventure, educate you with its insights into Islam and the Pakistani people, and challenge you with its notions of their way of life. It is beautifully told and utterly compelling on every level. I can’t recommend this book highly enough. It is one that every would-be adventurer should read, and a worthy inclusion in any library.