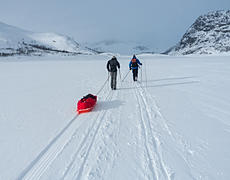 A pair of twin adventurers from New Zealand are gearing up for what promises to be quite an adventure. Over the next three years, Zac and Josh Lyon plan to ski across the four largest ice caps on the planet in an effort to inspire young people back home, and around the world, to pursue their dreams and adventures.

Zac and Josh call their project the 4 Caps Expedition, and they’ll launch the first phase of the adventure on August 24, when they’ll attempt to ski across Greenland, east to west. From there, they hope to continue to explore the frozen areas of our planet, by also skiing to the North and South Pole, and eventually crossing ice cap in Patagonia as well.

The two young men are outdoor and adventure enthusiasts for sure. Their website says they enjoy trail running, mountain biking, climbing, caving and more. Part of their dream for the 4 Caps Expedition is to show that ordinary people can do extraordinary things if they just put their mind to it, and follow their dreams. That theory will be put to the test in August when they start their ski crossing of Greenland, which will serve as a good testing ground for even bigger challenges to come. In preparation for that journey, the boys spent some time training in Norway this past winter.

As you probably already know, I’m a big fan of people finding their own adventures in life, no matter what it might be. I also support any efforts that involve inspiring young people to get outside and get active as well, and Zac and Josh’s expedition hits all of those those notes nicely. It should be fun to follow along with their progress over the next three years, and four ice caps. Good luck to them!

And thanks to reader William Stewart for sharing this story. It is much appreciated!