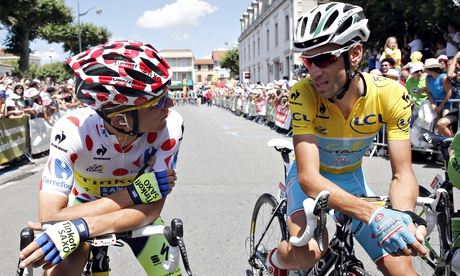 With the 2014 Tour de France all but decided, fans of the race are hanging on to see who will claim major stage victories, and stake claim to all of the jerseys that are not yellow in color. Usually, the big mountain stages bring tension and drama, but this year they have provided individual efforts for glory on individual stages, while the peloton watches Italian rider Vincenzo Nibali continue his dominance of the race.

Today’s stage was expected to be a punishing one, and it lived up to the hype. With the riders now moving into the big mountains of the Pyrenees, the peloton struggled to stay together across three Category 1 climbs, and a final push up the Pla d’Adet on a Beyond Category slope, that ended with a summit finish. It was a day that would sap the legs of all but the strongest of riders, even though it was a mere 124.5 km (77.4 miles) in length.

The hero of the day was Polish rider Rafal Majka, who wore the Polka Dot Jersey of the King of the Mountains at the start, and only extended his lead in that category at the end of the day. He was chased by Giovanni Visconti of Team Movistar, who finished 29 seconds back, while Nibali came across the line in third, 46 seconds off the pace. But that was enough to take more time from his rivals, and extend his overall lead in the race.

At the end of the stage, Nibali had a 5:26 lead on Alejandro Valverde, and a 6 minute lead on Thibaut Pinot. With one more big mountain stage to go, and no sign of cracking, the Italian seems assured of riding into Paris with the Maillot Jaune, that is barring an unforeseen problems.

In the race for the other classifications, there were very few sprint points available today, and Peter Sagan of Cannondale continues to have a commanding lead in that category. As mentioned, Majka has consolidated his lead on the Polka Dots, with Nibali now in second place some 31 points back. Pinot still wears the White Jersey of the best young rider in the race as well, with rival Romain Bardet now 1:34 back.

If today’s stage was brutal, tomorrow is likely to be even harder, particularly following such a hard stage. The ride will begin in Pau and end on the Hautacam, covering 145.5 km (90.4 miles) in the process. That doesn’t sound particularly hard, but when you factor in a long, tough climb up the dreaded Tourmalet, a Beyond Category climb that will haunt the nightmares of the riders, you’ll begin to understand why Stage 18 will be such a struggle. But the Tourmalet is just part of the problem. That peak will give way to a fast and furious descent, before the riders than face a grueling slog up the Hautacam, where another mountain top finish awaits them. That is another Beyond Category climb designed to destroy the legs of the riders. Personally, I wouldn’t be too surprised to see Nibali as the lone rider coming to the summit in Yellow to take the stage win.

The race is winding down quickly now, and on Friday it will return to the mostly flat roads as the riders prepare for the 54 km (33.5 mile) individual time trial on Saturday. Sunday will mostly be a ceremonial ride into Paris, while the sprinters joust on the Champs Élysées. While I’m always sad to see the race come to an end, I do wish that there hadn’t been so many contenders crashed out early. Le Tour is missing drama and competition in the final days, as Nibali looked nearly unbeatable at this point.