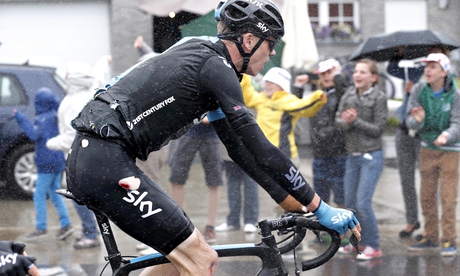 Heading into today’s Stage 5 of the Tour de France, we knew it was going to be a tough, challenging ride for the cyclists. The 152.5 km (94.7 mile) route wound its way from Ypres to Arenberg Porte du Hainaut, and while it was almost completely flat, the riders had a lot of trepidation for what waited for them out on the road. The stage passed over the dreaded cobblestones that permeate the roads in this part of France, earning the route the nickname of “The Hell of the North” for the treacherous riding that those cobblestones provide. A steady downpour of rain only added to their concerns, which turned out to be well founded. The slick conditions and uneven roads resulted in numerous crashes, with a number of riders going down hard. The worst of those was defending champion Chris Froome, who crashed out of the race, and will not repeat as the Tour champ. No matter what happens in the days to come, we will have a new winner in Le Tour this year.

The winner of today’s stage was Lars Boom of Belkin Pro Cycling. The former world cyclocross champion put those skills to the test today, and came out ahead. It is his best finish ever in the Tour de France, and the rider from the Netherlands looked strong going across the finish line.

Perhaps the biggest news, other than the loss of Froome from the Peloton, is that Vincenzo Nibali continues to hold on to the Yellow Jersey. In fact, he not only kept the Maillot Jaune, but extended his lead over his chief rivals. With Froome gone, the next rider to contend is Alberto Contador, but the Spanish rider looked anything but comfortable on his bike today. He came across the line well behind the leaders, and is now 2 minutes and 37 seconds behind Nibali. While Contador is probably a better climber, and the big mountains still loom a few days off, that is a lot of time to make up.

As with the Yellow Jersey, the other classifications remained unchanged as well. Peter Sagan retains both the Green Jersey for the Tour’s top sprinter, and the White for the best young rider under the age of 25. Cyril Lemoine kept the Polka Dot Jersey of the King of the Mountains, but there were no climbing points to be earned today. There will be a few opportunities for others to pick up some points in that category tomorrow.

Speaking of tomorrow, the route will cover 194 km (120.5 miles) between Arras and Reims. While it won’t have the cobblestone streets that dominated today’s stage, the weather is expected to remain poor, which could result in more slick conditions. The profile for the route remains fairly flat, although there will be two Category 4 climbs to overcome, along with an intermediate sprint point. It should once again favor the sprinters, although there is enough variety in the terrain that a strong breakaway could be successful. I wouldn’t expect much change int he General Classification, and Sagan has a strong lead in the Green Jersey competition, but we could see a new rider in the King of the Mountains jersey at the end of the day.

On a closing note, I want to say how disappointing it is to see Chris Froome exit from the race in this manner. I always want to see the defending champ have the opportunity to try to face his challengers out on the road, and as a fan of the sport I feel cheated by the fact that we won’t have the opportunity to watch Froome do just that. As a strong climber in the mountains, his best stages were still ahead, and yet a series of unfortunate accidents have sent him home. His Sky team will now rally around Ritchie Porte, but I’ll bet they are truly missing Bradley Wiggins right about now.