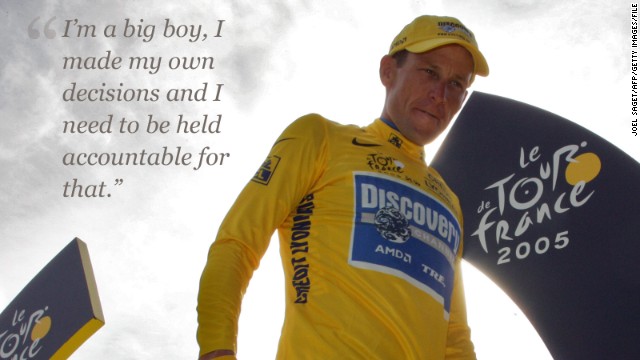 Former seven-time Tour de France winner Lance Armstrong continues to be a polarizing figure, both amongst cycling fans and the general public, with whom his story took on a larger-than-life aspect that transcended the sport that made him famous. Since admitting to using performance enhancing drugs more than a year-and-a-half ago, Armstrong has tried to get on with his life as best he can. Over that period, he has lost all of his sponsors, been dismissed from Livestrong, the organization that he founded, and publicly vilified on a number of occasions. In a new interview with CNN, Armstrong talks about life in the aftermath, and where he hopes to be headed in the future.

The interview with Armstrong is just the first of a two part series that takes a look at whether or not redemption is an option for Lance. In it, Armstrong says that he never encounters vitriol from the general public in his day-to-day life. He maintains that not a single person has ever said anything to him directly about the scandal, even though he has sensed that some have wanted to from time to time. He also notes that the characteristics that made him a great cyclist – the drive to win, the intensity, etc. – have also been part of his undoing in the wake of the revelation that he used PED’s while riding in the Tour. That combative attitude served him well as a professional athlete, but not so much when he has tried to reconstruct his public image.

Over the months since he admitted to doping, Lance has attempted to apologize, both to the general public and to those that he hurt along the way. That includes the likes of Greg LeMond, the former Tour de France winner who doggedly accused Armstrong of using PED’s, even when the rest of the world was willing to believe he was clean. LeMond has not accepted Armstrong’s calls. On the other hand, Frankie and Betsy Andreu, former friends of Armstrong who spoke out about his use of performance enhancing drugs, did accept his call. Lance says that his first apology was to Betsy, and she accepted, but now he feels that she has revoked that acceptance, and continues to carry a grade. While combatting all those accusations over the years, Armstrong was vicious and unrelenting in his counter attacks on those who questioned his story. That is something I’m sure is almost impossible to forgive.

Armstrong goes on to say that he won’t pass the blame on to anyone else. He is responsible for his actions, and is owning up to the decisions that he made. He also says that he’s ready to re-emerge in the public eye, although in a more understated fashion. He wants to relaunch the Lance Armstrong Foundation, his original cancer-fighting organization, and he is planning to write a book to tell more of his side of the story. Whether or not anyone wants to read it remains to be seen.

The interview is a long, and comprehensive one, and a good read for cycling fans, or those who have ever had an interest in Lance’s story. He is still a complicated figure, and it is often hard to reconcile feeling for what he has done. But, Armstrong recognizes this, and seems like a man who just wants to set the record straight, try to make some amends, and get back to doing the the things he loves.

The second part of CNN’s Armstrong story takes a look at the people that he stepped on as he was on his way to the top, and again when he came tumbling down. People like the Andreus, who say Armstrong still isn’t coming completely clean with his story. Betsy says that she and Lance had arranged to meet, so he could not only apologize in person, but he could look them in the eyes, and hash out some of the things he did and said. But she claims Armstrong cancelled that meeting at the last minute, and has spun the story to make it seem like she was the one who rebuffed him.

Greg LeMond talks a bit about his side of the story as well. When he first spoke out against Armstrong, he was helping to design bikes at Trek – a major sponsor of Lance. Trek would abruptly end their teal with LeMond which would put the former Tour champ – the only American to be recognized with that title – in serious jeopardy. With his business in ruins, and Armstrong’s lawyers coming after him with a full-court press, LeMond faced dramatic financial problems. That has all changed now, and he is weighing his options for suing Armstrong as well.

The gist of this second article is whether or not Lance can be forgiven for his bullying tactics. For years he went after those who spoke out against him, only for us to find out later that what they said was true. I’ve often said that while I was not surprised by the doping – it was part of the culture of cycling during Lance’s era – it was his behavior of attacking those who spoke up that disturbed me the most. He was heartless in his attacks, often running careers, and those are the actions that are most unforgivable.

Where the Lance Armstrong story goes from here remains to be seen. I applaud him for his efforts to get his life back on track, and continue to do good things to combat cancer. But I’m not sure he’ll ever be able to redeem himself completely. Lance Armstrong is a determined guy however, and I would never count him out of anything.

It should be noted, that the Livestrong Foundation has also donated $50 million to the University of Texas to help fund a new cancer research unit there. It is the organization’s biggest donation since Armstrong left, and it is a sign of his continued legacy as well. Something that should offer at least a little hope for forgiveness.