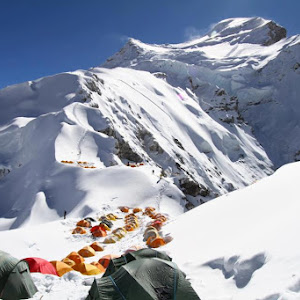 Summer is starting to slip away across the Northern Hemisphere, and in Nepal the summer monsoon is starting to weaken at last. That means it is nearly time for the start of another climbing season in the Himalaya, and ExWeb has posted a preview, giving us an idea of what to expect in the weeks ahead.

Typically, the fall climbing season focuses on a number of smaller mountains that are used to gain valuable experience for a spring attempt on Everest. That appears to once again be the case this year, although there are some expeditions that will be attempting some difficult climbs none the less. Take for example the Korean team heading to Lhotse to attempt the South Face. The group hoped to climb the same route last fall, but were thwarted by heavy snows. ExWeb reports that they are already in and out of Kathmandu, and should have started the trek to Base Camp yesterday. That should put them on the mountain sometime late next week, where they’ll start their acclimatization process. You may recall that Lhotse is the neighbor of Everest, and shares much of the same route up the South Col.

Meanwhile, over on Makalu, a British military team, supported by a squad of Sherpas, is attempting to summit along the Southeast Ridge. This team is still putting the finishing touches on their preparation, and haven’t quite left for Nepal yet. According to their website, they are expected to reach Base Camp around the 20th of September.

Spanish climber Carlos Soria is going for his 12th 8000-meter peak. He’ll leave for Shishapangma next week. This past spring, Carlos became the oldest person to summit Kangchenjunga, and at the age of 75, he continues to be an inspiration to all of us. It doesn’t appear that Carlos has any intention of slowing down either, as he aims to nab all 14 of the 8-thousanders.

He won’t be alone on Shisha this fall. ExWeb says that he’ll be joined by an Italian team that will attempt to speed climb both that mountain, and Cho Oyu, traveling between the two on mountain bikes and by trail running. That should be an impressive effort to follow. Danish mountaineer Bo Belvedere Christensen will also be going for the double-header on both Shishapangma and Cho Oyu as well.

Cho Oyu will be one of the mountains that receives a lot of traffic this fall, with a number of commercial teams, including IMG, Summit Climb, and Adventure Consultants leading the way. Those teams have already gathered in Nepal and Tibet, and will be departing for the mountain soon. Once there, they’ll be joined by a few independent squads, including Polish climber Olek Ostrowski, who will be attempting to ski the mountain. He departs for the Himalaya tomorrow.

Finally, Manaslu is another mountain that is often used for preparation for Everest. The Altitude Junkies are leading a commercial squad to that mountain, and their Sherpas are already in BC. In their last update, the team was still waiting for the monsoon to abate before proceeding. The Amical Alpin team is also en route to the mountain for a fall summit attempt too.

As of now, there are no announced Everest expeditions for the fall, but that can change of course. We’ll be hearing a lot of news in the days ahead about these climbs, and probably a few surprises that haven’t appeared on the radar just yet. Stay tuned for more updates in the days ahead.