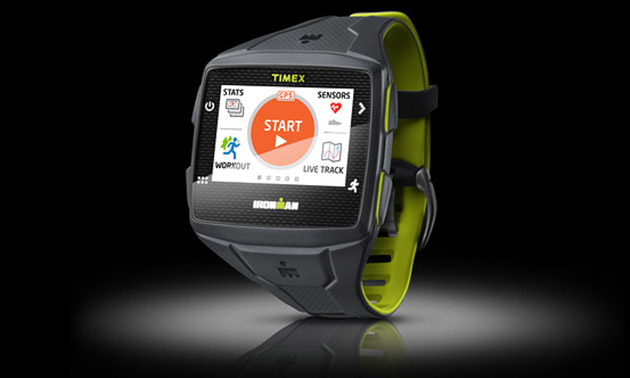 Yesterday I shared some thoughts on just a few of the great products I saw at Outdoor Retailer last week, spotlighting some items that stood out in a sea of new boots, tents, backpacks, and sleeping bags. While of course, those items are a staple of OR, there are plenty of other gear items to see there as well each year. The show can be overwhelming at times, but it also is a good indicator of the trends we’ll be seeing in the outdoor industry in the days ahead.

One of the tends I noticed this year was a distinct movement by a number of companies to get into the “wearable” technology space. Obviously there have been a number of excellent fitness watches on the market for years now, but the devices that were on display at Outdoor Retailer were more sophisticated and connected than ever before. Most paired with a smartphone to collect data and track our runs, rides, and other workouts, but others upped the ante in other ways as well. As a result, there were some impressive products shown, as the industry prepares to for what ever product Apple will announce for this market sometime this fall.

Here are a few of the wearables that caught my eye at Outdoor Retailer.

Timex Ironman One GPS+
While most of the companies showing off new fitness watches were looking to connect to your smartphone, Timex introduced the Ironman One GPS+, a watch that connects to AT&T’s 3G cellular network to share data without the need for another device. The watch can send and receive messages, share your GPS position with friends and family, and even alert them with an SOS should something go wrong. It has 4GB of onboard storage for carrying music, and includes all the typical features you would expect out of a watch designed with the triathlete in mind. It will retail for $399 when it is released, although no shipping date has been announced just yet. The watch includes one year of free service on AT&T’s network, although fees for use after that year is up have not been announced either. How useful the watch will be in areas that lack cell coverage remains to be seen, and battery life is suspect until Timex proves otherwise.

Mio Link Heart Rate Monitor
At last summer’s Outdoor Retailer, the folks from Mio were crammed into a tiny booth, showing off a great looking fitness watch that could monitor your heart rate without the need for a bulky, annoying chest strap. This year, they were back with a much larger, and nicer, booth to show off that product once again, as well as their $99 Mio Link wristband that does away with the watch functionality, and only provides heart rate monitoring. The band is ANT+ and Bluetooth compatible, so it should connect with your other fitness devices, providing a great alternative to the chest straps that no one really likes to wear. The Link is available now, but coming soon will be the new Mio FUSE, a fitness and activity tracker that promises better functionality and improved performance. It will ship in time for the holidays, and carry a $179 price tag.

TomTom Fitness Watches
Speaking of Mio, the folks over at TomTom were so impressed with their technology that that they actually licensed their heart rate monitoring technology for their own watches. This allows the TomTom devices to do away with the chest strap as well. This technology is integrated into the company’s Cardio line of fitness watches, which are available now. These devices connect to a smartphone, offer an easy to use touchscreen interface, and are competitively priced at $269. Considering what you would pay for a GPS watch that includes a heart rate strap, that’s quite affordable.

Suunto Ambit 3
I already wrote about the Suunto Ambit 3 when it was officially announced, and it is still on track for a September release. The device will have Bluetooth connectivity for the first time, as Suunto expands into the connected device space. This will allow the you to share workout data via social media of course, and get notifications directly on your watch. But there is more to the Ambit 3 than just being able to communicate with your smartphone, as it will also interact with geotagged photos to share information about your workout, while also gaining the ability to use that data to create videos that overlay speed, and distance covered, on a 3D generated map of your run, climb, ride, or paddle. The Ambit 3 doubles the battery life of its successors, and adds daily activity tracking to the mix as well. As is typical with Suunto’s watches, it won’t come cheap. The “Sport” model will start at $400, while the “Peak” edition will go for $500.

Garmin Forerunner and Vivofit
Not to be left behind, Garmin was showing updated firmware for their popular line of Forerunner fitness watches that gave them more accuracy and features as well. These affordable watches have just about everything you could ask for in a wearable device aimed at helping your workout, and the company continues to provide good support as the products evolve. Garmin has added support for more fitness apps on our phones, and has created some of the most versatile fitness watches on the market at the moment. But, not content to sit still, they’ve all launched the Vivofit, an activity tracker that is designed for use all day. At $129, it is very affordable, and offers a fun, unique way for casual athletes to get into better shape. It mostly tracks movement, counting your steps each day, but it can also monitor calories burned, distance covered, and duration of the workout. Users can set goals, with an included app keeping track of progress. It is available in five colors, and should compete nicely with similar devices such as the Fitbit.

That’s a round-up of some of the new wearable technology I saw. There were a few other things, but mostly stuff I can’t talk about yet, including a pair of earbuds that also have the ability to monitor your heart rate. Those will come in due time of course, but for now, it is the smart fitness watch that seems to be getting all of the attention. Of course, these could all be rendered obsolete if Apple deliver an exciting product this fall, but considering they are an unproven quantity in this space, I’m not sure how much these companies need to worry about the “iWatch” just yet.