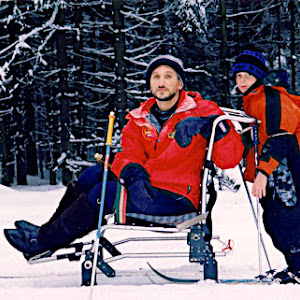 ExWeb has an inspiring story for us today, as they share a brief profile of Russian polar guide Dmitry Shparo, who has spent more than two decades helping disabled individuals achieve their dreams and goals in the arctic and antarctic. The explorer, whose resume includes being on the first team to reach the North Pole during the long polar night back in 2007-2008, feels that physical impairments should not be an impediment to experiencing true adventure, and he has specialized in helping the disabeled to do just that.

ExWeb says that this past spring, Dmitry – along with his youngest son Matvey – led two hearing-impaired teenagers to the North Pole. This is just one example of what Dmitry has helped his clients to achieve, with perhaps the most impressive occurring back in 2000, when he and fellow polar explorer Boris Smolin helped lead paraplegic Igor Kusnetsov across Greenland’s icecap. Kusnetsov made that journey in a specially built wheelchair that was mounted on skies. The entire journey covered roughly 600 km (372 miles) along the Polar Circle between the towns of Ammassalik and Sondre Stromfjord.

Apparently that experience will come in handy for Dmitry’s next big challenge. While ExWeb is light on the details, the story indicates that the Russian polar guide intends to lead an expedition to the South Pole in 2015 that will give a quadriplegic athlete by the name of Igor Ushakov a chance to travel across the antarctic in a wheelchair. The planned route will cover 934 km (580 miles). Shparo will once again be accompanied by his son Matvey on this journey, which will test their strength and endurance for sure.

While the 2014 antarctic season is still a few months off, I’m already looking forward to hearing more about Dmitry’s plans for next year. It would be an incredibly inspiring story indeed to follow Igor on his monumental journey to the South Pole. And if he is able to achieve that goal, it would also serve a further testament to what a disabled person can overcome when they set challenges for themselves, and achieve them.