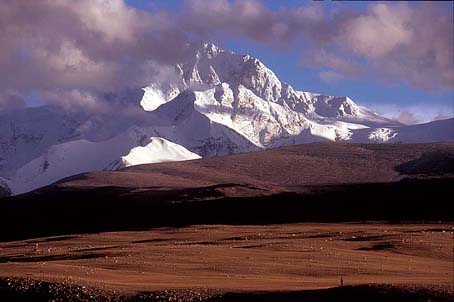 I wanted to post a quick update from the Himalaya today on the Doube8 expedition. The team, which consists of Benedikt Böhm, Sebastian Haag, and Andrea Zambaldi, launched their bid to summit two 8000-meter peaks in seven days on Wednesday, and had hoped to have topped out on their first mountain – Shishapangma – yesterday. Unfortunately, the trio are back in Base Camp, and did not manage to summit as they had hoped. But the expedition is not done yet, and they’ll be giving it another go in a few days.

According to an update posted on their website, the team ran into deep snow high on the mountain. Reportedly, the snow was several meters deep, making it exhausting to try to break trail and continue upwards. Additionally, they felt that there was a great deal of risk for avalanches as well, so they felt it was best to turn back. The men reached as high as 7700 meters (25,262 ft) before they made a ski descent to Advanced Base Camp. For the record, Shisha is 8013 meters (26,289 ft) in height, so they were closing in on the summit, but still had a good deal of work to do before they would have topped out.

The three climbers, as well as Norbu Sherpa, are all said to be in good health and spirits. They are most assuredly disappointed by the result of their efforts, but they are now resting for another attempt. The dispatch on their website says that that second attempt will get underway “within the next few days,” but the countdown time on the front page has been reset, and it would appear that they’ll try again starting next Monday.

As you may recall, Böhm, Haag, and Zambaldi hope to first make a speed climb up Shishapangma, then descend back to BC on skis. From there, they intend to ride their mountain bikes 100 miles to reach Base Camp on Cho Oyu, their second 8000-meter peak. They will attempt another alpine-style climb up Cho Oyu, which tops out at 8201 meters (26,906 ft), before once again making a ski descent. It will be an incredibly tough week in the Himalaya, as they are already discovering.

The video below was posted to the team’s YouTube Channel as I was prepping this post. It offers more insights.