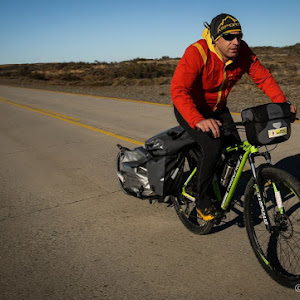 Explorers Web posted an interesting interview today with Francesco Magistrali, an Italian adventurer who is in the midst of a journey across South America using only non-motorized transportation. The adventure, which he calls the Esmeralda Expedition, began in Ushuaia, Argentina, and continued to Torres Del Paine and Los Glaciares National Parks in Patagonia, before heading on to Valdivia and Santiago, Chile. That leg of the journey was completed on a mountain bike, but Magistrali will also be traveling on foot, and kayak throughout his journey as well. Next he’ll head to the Atacama Desert in Northern Chile, and then on to the Sala de Uyuni Salt Desert in Bolivia. From there, he’ll proceed to Yungas, a dense forest along the Andes Mountains, before ultimately wrapping things up by paddling the Madeira and Amazon Rivers to the Atlantic Ocean.

In the interview with ExWeb, Francesco says that the goal of his expedition is to get to know the locals where he is traveling, and experience the unique environment in which they all live. He also undertook the journey in order to challenge himself, and to push his own limits, of what he can accomplish under his own power. He also talks about how he prepared himself mentally and physically for the travel, and the benefits of going solo versus having someone with him.

It took Magistrali about four months to mountain bike from Ushuaia to Santiago, where he has been spending some time visiting with friends and family before returning to the road. He says that the first leg of the journey has been an easy one, with paved roads and good weather helping to make positive progress. Francesco says that was all just a warm-up for the challenges that will come next, as the expedition will get much harder from here. He expects to reach the Atacama in October, before heading out into more wild, and challenging, areas from there.

In all, the expedition is expected to take roughly ten months to complete, covering approximately 10,000 km (6213 miles). You can follow along with Francesco’s progress on his website and Facebook page. It looks like it’ll be quite a journey when it is all said, and done.