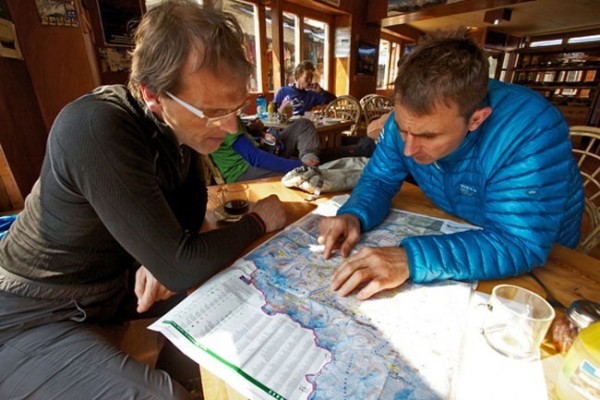 In 2013, Simone Moro and Ueli Steck were involved in one of the more high profile mountaineering incidences in recent memory when they got into a fight with Sherpas on Everest. Words were exchanged high on the slopes, and egos from both parties got in the way, leading to an escalation of the situation beyond what anyone had anticipated. The conflict turned dangerous, and if it wasn’t for the intervention of a few other western climbers, who knows what would have happened. As a result of the highly-publicized argument, both Simone and Ueli were turned off to the climbing scene in the Himalaya, and even indicated that they might not return. Ueli has since gone back to make his amazing solo-summit of Annapurna last fall, and now there are some indications that the two men could team up once again for an attempt on Everest.

In a recent interview, Simone has outlined some of his plans for the future, which include several ambitious projects, including a potential return to Everest. He says that he would like to go back to Nanga Parbat to make another attempt at a winter ascent, but he is still searching for the right partner. Previous teammates David Göttler and Denis Urubko are unable to join him this year as David is resting after a busy climbing schedule, and Denis has concerns regarding security on the mountain. But if he can find the right person, Moro would like to go back to Pakistan once again.

Regarding a winter attempt on K2, Simone says that he will not attempt that climb. His says that his wife had a dream in which she saw him die on K2, and because of that dream, he has made a promise to not attempt that mountain in winter. Nanga Parbat and K2 remain the only two 8000-meter peaks unclimbed during that season.

As for his plans with Ueli, Simone says that the two climbers are planning on pairing up to make an attempt on Everest and Lhotse, making a back-to-back summit of the two mountains. He says that they are committed to going back, despite the harsh statements that were made in the wake of the fight with the Sherpas. Moreover, the Nepali government has recognized that there were extenuating circumstances that disrupted their expedition last year, and has extended their permit, allowing them to return to try again.

According to the story linked to above, they will not be going back this fall, as there is too much snow on the mountain following the monsoon. Instead, they are likely to wait until spring, and then make their return to Everest – something I think we’d all like to see happen.