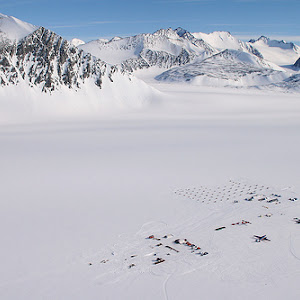 The 2014 Antarctic season is still a couple of weeks away from getting started, but the prep work for the support teams on the frozen continent have already begun. ExWeb is reporting that ANI flew the first support team to Union Glacier last week, where they are now prepping for the arrival of the South Pole skiers, climbers heading to Mt. Vinson, and the various other expeditions that will be taking place in the weeks ahead.

ANI’s advance team arrived at Union Glacier on October 17, where they promptly went to work preparing for the new season. That prep work includes setting up the permanent camp facilities there, which serve as a logistical base for everyone that comes and goes from the Antarctic on ANI flights. The team is also preparing the company’s blue ice runway and ensuring that it is ready for the big Ilyushin-76 aircraft that serve as shuttles from Punta Arenas, Chile to the facilities on the frozen continent.

In order for this first ANI staff to get to Union Glacier, they must first charter a flight with Kenn Borek Air, who uses smaller, shorter ranged Twin Otter aircraft for flights throughout the Antarctic. Their flight path took them from Punta Arenas to the Rothera Research Station – a British scientific outpost located on Adelaide Island. From there, the flight hops over to Union Glacier to drop off personnel and supplies.

Over the next couple of weeks, the ANI team will stock the Union Glacier camp, and make it as comfortable as possible before the arrival of the first wave of South Pole skiers. Usually, those adventurers start arriving around the first of November, although the weather actually dictates when they can get to the camp, and start their expeditions. Most spend only a short time at UG, before they are flown out to Patriot Hills, the traditional starting point for a journey to 90ºS.

ExWeb also points out that there is one other base that supports Antarctic expeditions, although it isn’t used quite as often as ANI’s Union Glacier camp. It is located at the Russian science station Novolazarevskaya, with flights arriving out of Cape Town, South Africa. The first flight due for that camp is scheduled to take place on November 4, and is reportedly fully booked.

It looks like another busy Antarctic season is about to get underway. As usual, I’ll be following the progress of the teams closely.