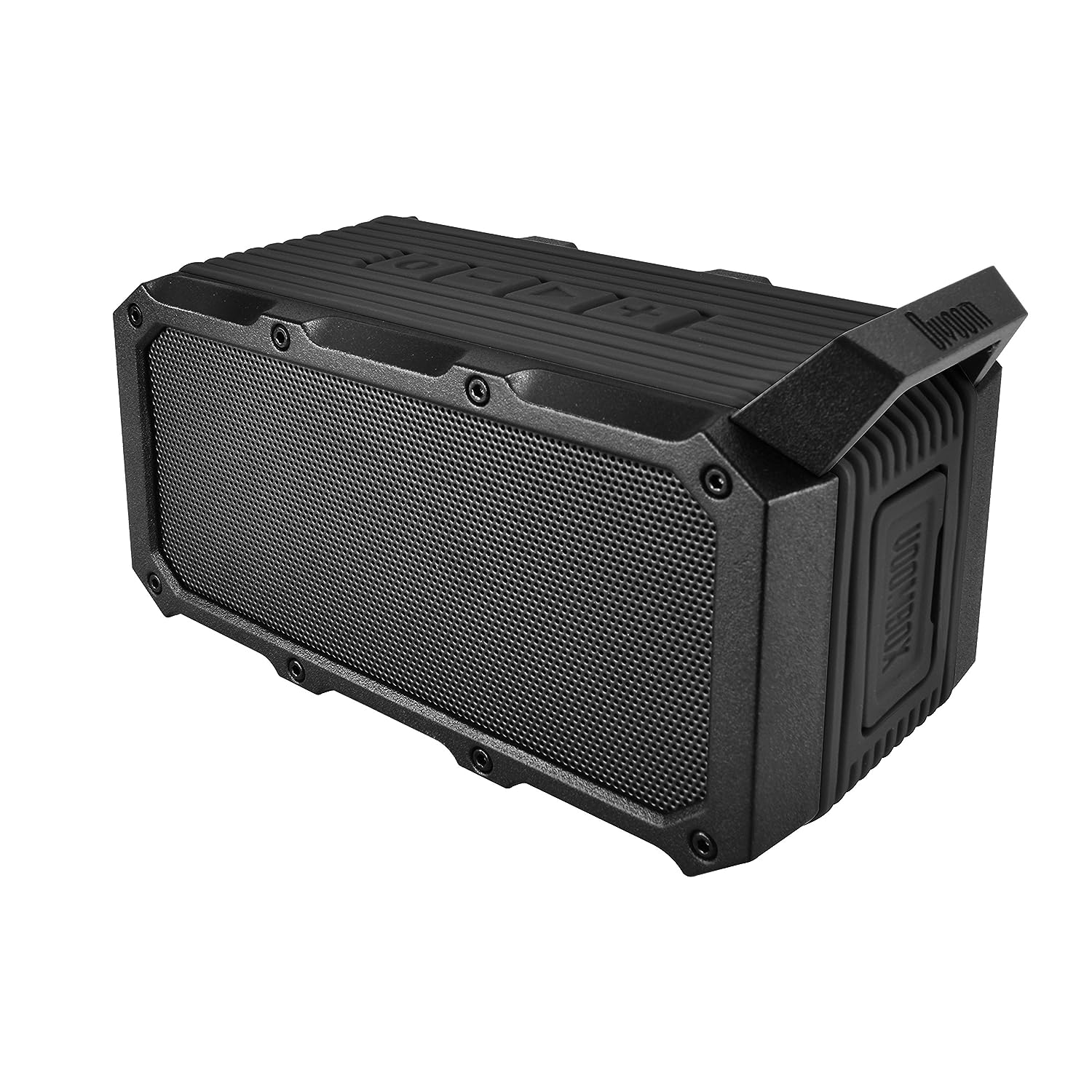 With the rise in popularity of smartphones, tablets, and advanced mp3 players, many of us know head out on our outdoor adventures with an entire library of music in our pockets. Often, we enjoy listening to that music through a pair of earbuds while being active, but it has also become increasingly poplar to carry a small, rugged Bluetooth speaker on backcountry trips, so it is possible to enjoy our music while sitting around the campfire. It was with this – and a few other things – in mind that Divoom introduced the Voombox Ongo ruggedized speaker, a portable sound system that delivers surprisingly nice sound, out of a small box.

The idea behind the Ongo is to give outdoor lovers a great speaker that they can take with them everywhere, without fear of it being destroyed when used while hiking, camping, backpacking, or mountain biking. The product reflects this in its design, as its outer rubberized shell is incredibly rugged. In fact, it feels like it can take a beating, and keep on cranking out the tunes. Divoom says that the Ongo is weather/water resistant, with an IPX44 rating. That means it is capable of being sprayed with water from any direction, and keep working properly. Suffice as to say, this is a nice feature to have when using the device outdoors, but you certainly don’t want to immerse it completely in water.

This rugged design will be appreciated by those looking for a Bluetooth speaker to travel with, but it does come at a price. The Ongo is heavy, tipping the scales at just over one pound (460 grams). If you’re the kind of backpacker who counts every ounce, this is probably a luxury that you won’t want to take with you into the field. On the other hand, if you like to travel light, but enjoy having a few amenities with you, this speaker might be a welcome addition to your pack.

As with all Bluetooth speakers, you pair the Ongo with a smartphone, or other device, and wirelessly stream your music from up to 10 meters (33 feet) away. Paring is a simple affair that takes just a few seconds, and soon you have music playing from the Voombox’s twin speakers. The sound is crisp, clear, and quite good, with 7 watts of total power. That may not sound impressive, but the small speaker is capable of filling a room, and producing enough sound outside so as to not be drowned out by the environment. In fact, it is perfect for hanging out around a campfire, or snuggling up inside a tent, with some music playing in the background.

Divoom says that the Ongo is capable of playing audio for up to 8 hours on its built-in rechargeable battery. I actually found that number to be on the low side, as I was able to coax a longer playing time out of the device. A recharge requires about 3-4 hours using a standard, and included, micro-USB cable.

Also included in the box is an audio cable that allows you to plug in a device that isn’t Bluetooth compatible, as well as a simple mounting system to attach the Ongo to the handlebars of your bike. While the mount does indeed hold the speaker in place, I found having the largish box on my handlebars to be quite distracting, and through off my concentration to a degree while riding. Casual bike riders may not have an issue with having the Ongo connected to their bike, but I can’t imagine too many dedicated mountain bikers who would tolerate the change in balance, or other distractions, that it brings.

That said, the speaker does have a standard mounting port built into its bottom which can be used to attach it to a small tripod instead. I found this to be far more useful, as it gives you the ability to elevate the Ongo some, and project its sound more fully. If you’re already carrying a tripod for your camera while traveling, attaching it to the speaker takes just seconds, and gives it a nice level of versatility that not all of its competitors can claim.

The Ongo also has a built-in microphone, which when paired with a smartphone allows it to be used as a speakerphone as well. I didn’t have a chance to test this feature prior to writing the review, but I thought it was worth mentioning none the less. That particular feature might not be all that handy while backpacking, but it could be quite useful when using the Ongo around home.

As Bluetooth speakers have become more ubiquitous, they’ve also come down in price, while increasing their quality significantly. The Voombox Ongo comes with a manufacturers suggest price of $79.90, although as with all things, it can be found online for less.

If you’re int he market for a durable Bluetooth speaker that you can use outdoors, or on your travels, the Voombox Ongo is a great choice. It is certainly rugged, and manages to put out a great deal of sound for the size. The battery life is long enough to last a weekend trip without much of a problem,  and it’s ability to charge via USB makes it easy to keep functioning on longer excursions as well. While carrying a speaker with you on an adventure may be a bit of a luxury, if you can make rooming your pack, the Ongo won’t disappoint.