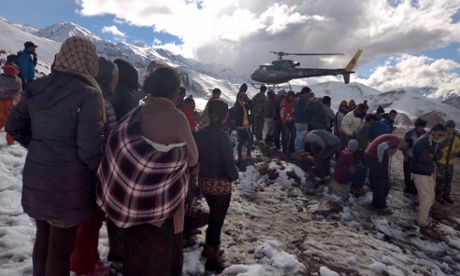 It was another busy weekend in the Himalaya, but sadly for all the wrong reasons. Search and rescue teams spend the past couple of days sweeping through the mountains in search of missing trekkers who were caught out in that horrific blizzard that struck Nepal last week. The weather has improved considerably since then, but a number of people are still missing, and feared dead, in what has become the worst tragedy in the history of the Himalaya.

Efforts to locate missing trekkers and locals were continuing today, even though the SAR teams have started to scale back their efforts. All told, more than 40 people lost their lives in the storm, while 600 had to be rescued. Most of those were in the Annapurna region, where the storm seemed to hit the hardest.

Over the weekend, the popular Annapurna Circuit was shut down, while rescue efforts were conducted. When it was finally opened again, new trekkers, just setting out on their hike, ran into trouble as well, and had to be evacuated. This prompted officials to shutdown the trail once again, in order to keep others from becoming stranded.

As recently as today, ongoing avalanches have hampered efforts to locate those who are still missing. Despite those challenges however, a search team located the body of a missing Israeli traveler, which brought the death toll to 40, with others still to be found.

Typically this time of year we focus on the climbing efforts in Nepal, as mountaineers take advantage of the good weather that follows the summer monsoons. But trekkers arrive in high numbers in the autumn too, as it is usually the best time of year for hiking in the region as well. This freak snow storm caught many off guard, including the locals who live in the mountain. This type of blizzard isn’t common, even in the winter, and it arrived with so much speed and ferocity, that its strength was underestimated, which is why so many people ended up stranded and dead.

Elsewhere, the climbing teams that remain in Nepal are continuing to press ahead. The British Tri-Services team is now in place at Camp 3 on Makalu, and are preparing for the final push to the summit in the next couple of days. They’ll use C3 as a launching pad for what will now become an alpine style ascent. The weather is reportedly very good, and is expected to remain that way throughout the week, giving them the best opportunity to summit that they’ve seen yet this season. Four members of the team will be on the move tomorrow, with the hope that they can top out by Wednesday or Thursday, depending on how quickly they can make progress along the long, and difficult Southeast Ridge.

On the other side of the mountain, the Madison Mountaineering team launched their summit bid on Saturday, but reportedly were forced to turn back due to high risks of avalanche along their route. The team has not updated its dispatches in a couple of days however, so these reports are unconfirmed at this point. Typically, if they did abandon the attempt, they would be back in Base Camp by now, and would have sent a dispatch confirming their plans. Hopefully all is well, and we’ll get an update on their progress soon.

Finally, there has not been any significant updates from the Korean team on Lhotse in the past few days. The last we heard, they were preparing to push up to C3 and establish their camp at that point on the mountain. They have most likely waited out the storm as well, and will be back on the move over the next couple of days, but progress has been slow all season. Hopefully we’ll get an update soon.

That’s all for today. It seems then worst of the crisis has passed, although conditions remain dicey throughout the region. Hopefully there will be  no more deaths due to the poor weather, and both trekkers and mountaineers will return safely from their adventures.