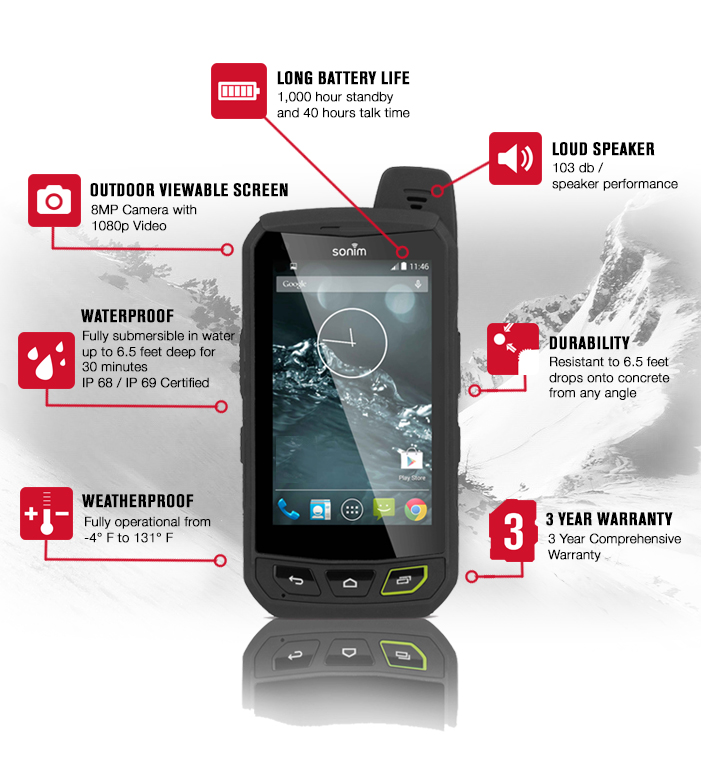 Adventure travelers and outdoor enthusiasts looking for the ultimate smartphone to take with them on their excursions may want to check out the new Sonim XP7, a device built to withstand just about any type of punishment, and keep coming back for more. The phone is currently seeking crowdfunding through an Indegogo campaign, but is quickly closing in on its goal. As of this writing, it has already raised nearly $130,000 (of its $150,000 goal), with 34 more days left to go. In short, that means it is already a success, and should begin shipping in early 2015.

So, what exactly does the Sonim XP7 bring to the table? Well for starters, it is designed to work in extreme environments. The manufacturer says that it is weatherproof down to -4ºF/-20ºC and can operate in heat in excess of 131ºF/55ºC. It is also waterproof to an IP 68/69 certification, which means it can withstand being submerged in 6.5 feet (2 meters) of water for up to 30 minutes. The XP7’s ruggedized outer shell is also capable of withstanding a drop onto concrete from a height of 6.5 feet (2 meters) as well. If that wasn’t enough to convince you the device is tough, Sonim is also backing up the product with a 3-year warranty.

In terms of being a smartphone, the XP7 runs the Android operating system (Android 4.4 KitKat), and comes equipped with a 4800 mAh battery that is said to provide 1000 hours of stand-by time, and up to 40 hours of talk time. If those numbers are accurate, that is amazing battery life for a smartphone, and particularly one that runs Android. The phone also has an 8MP camera and is capable of shooting 1080p video, even underwater. The phone runs on GSM networks, and has LTE capabilities for high speed mobile data as well.

There are multiple levels for contributing to the Indegogo campaign that is currently underway, but probably the one that will be most interesting to consumers is the $579 contributor point, which not only gets you the Sonim XP7 phone, but some other nice items as well. Anyone who helps fund the device at that level, also receives a Sonim Bluetooth headset, a micro-USB adapter, a $200 trade-in credit towards a new Sonim phone in 2016, and an “explorer virtual goodie bag” which contains one month of free voice and data service on Ultra Mobile, a coupon for $100 off an Oru Kayak, and a coupon for 20% off at Fisher Boards.

If you’re in the market for a new smartphone, and you’re having a hard time finding anything that can survive your active lifestyle, than perhaps the Sonim XP7 is the answer. It is still a couple of months from being released, but if you act now, you can get it at a great price before launch. Find out more here.