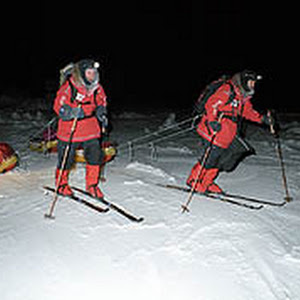 A few weeks back we received news that Kenn Borek Air has ceased operations in the Arctic. The company, which goes by the motto “Anytime, Anywhere…Worldwide” has been a stalwart on the Canadian side of the North Pole, shuttling explorers to and from the ice for years, and helping with the logistics of operations in that part of the world. But its sudden departure from the scene has left some teams in the lurch. Several groups had already contracted with Kenn Borek for the 2015 and 2016 Arctic seasons. Those intrepid adventurers are now wondering what they can do to overcome this obstacle, with some considering jumping to the other side of the planet, and skiing to the North Pole from Russia instead.

With that in mind, ExWeb caught up with Victor Boyarsky, the owner of VICCAR, a company that specializes in logistical support in the Arctic and Antarctic. Boyarksy’s organization offers assistance on both the Russian and Canadian side of the ice, although at this point, VICCAR will only be able to offer rescue operations and evacuations from the ice, as the company mostly works out of the Barneo Ice Camp, which is erected every year on an ice flow located around 87º or 88º N latitude.

In the interview. Victor provides some history on the Russian Start to the Geographic North Pole, which is traditionally located at 81º.2N, 95.5ºE. Originally, that point was a good place to store fuel and other supplies for helicopters heading into the Arctic, but it also became a place to drop skiers off as well. The fueling point is still used by aircraft on their way to Barneo, but in 1995 it was first used to launch an expedition to the North Pole as well. It has been used routinely since that time as the starting point from that side of the ice.

ExWeb indicates that they have inquired with other airlines to see if anyone will step up to fill the vacuum created with the departure of Kenn Borek, but so far no one has said they’ll begin supporting the North Pole skiers. That means that explorers planning on heading to the Pole may have to shift to the Russian Start instead, or abandon their plans of going to the North Pole altogether. Without air support, not only will it be incredibly difficult to get to the starting point on Ellesmere Island, it could be incredibly dangerous to try to operate in the Arctic without the safety net of a rescue flight coming to retrieve them.

Skiing to the North Pole has always been an incredibly difficult endeavor. In fact, I believe it is the toughest expedition in the world today. At the moment, it seems that there will no longer be any operations conducted from the Canadian side of the ice, at least for the foreseeable future. Whether or not we see more expeditions heading to the Russian side remains to be seen.

With the North Pole season just a few months away, it will certainly be interesting to see how this will all unfold. My guess is, we’ll see a few expeditions cancelled this year, and possibly rescheduled for 2016 instead. It is likely to be a quite season in the Arctic in 2015.