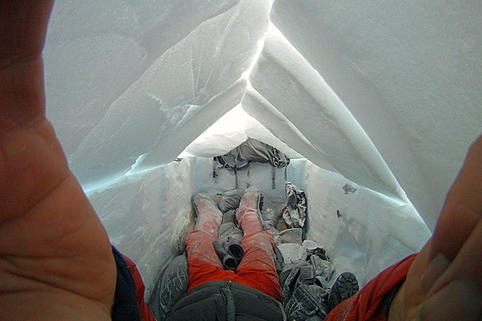 Just a very brief update from Alaska today, where Lonnie Dupre has been waiting for the arrival of the New Year, while preparing for his major challenge ahead. His plan is to make a solo-summit of Denali in January, which is when that 6168 meter (20,237 ft) mountain is at its absolute coldest. This is his fourth attempt at this expedition, and Dupre is already being reminded of why this is such a difficult goal to attain.

Since his arrival on the mountain a few weeks back, Lonnie has been shuttling his gear up the route, and building a series of camps that will be well stocked for when he eventually makes his summit push. This is not only a good logistical move, it is also helping him to acclimatize. A few days ago, he reached an altitude of 11,200 feet (3413 meters), where he had intended to stash some gear, and then descend 600 feet (182 meters) back down the slope for a rest day. High winds and very cold temperatures have hit his location however, forcing him to take a second consecutive rest day simply because it was unsafe for him to climb in the whiteout conditions that had developed. Reportedly, winds were as high as 60 mph (96 km/h), and temperatures plummeted with their arrival.

Just how cold does it get on the mountain? Have a look at the photo attached with this blog post. That’s Lonnie inside of a snow cave that he dug for protection on his 2012 expedition. As you can see, the frost is forming on his boots and pants, and just about all the rest of his gear, due to the temperatures. These are the kinds of challenges he is facing as he presses ahead with the climb.

Tomorrow marks the first day of 2015 and of January. That means the clock is now officially ticking on the expedition, and Lonnie has 31 days to complete his quest. The weather forecast calls for improving conditions over the next few days, so he now plans to descend a bit lower, collect some more gear, and bring it back up to 11, 200 feet. From there, he’ll begin scouting the upper sections of the mountain and start placing his high camps in anticipation of an eventual summit push. The next few weeks should be prove very interesting.

Elsewhere, the teams on Nanga Parbat should be gathering in Base Camp now as well. Expect reports on the progress on that mountain soon too.