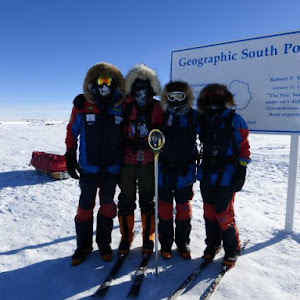 The number of teams to report on in the Antarctic has now dropped considerably. Most of the squads have wrapped up their expeditions by now, and are heading home. But there is still a few weeks to go before the frozen continent shuts down for the season, and there are still a few teams trying to accomplish their goals out on the ice.

As expected, the four-person team led by Robert Smith that included Paula Reid reached the South Pole over the weekend. The group reached 90ºS on Saturday at about 5:20 PM local time. Traveling along the Messner Route, the squad took 46 days to cover the 890 km (553 mile) journey. There has been no update since their arrival, but if the weather has held as expected, the group should be back at Union Glacier by now, and preparing to fly to Punta Arenas to start their trip home.

Meanwhile, kite-skier Faysal Hanneche continues to struggle on his expedition. He began at the Russian Novo station and has been trying to make his way to the South Pole, but the winds have simply not cooperated in recent days. In his most recent dispatch, Faysal talks about how he had to ski without aid all day, only to make camp and have the wind pick up. Hoping to cover some distance, he quickly broke camp once again, only to find that in the low light he wasn’t able to make out the sastrugis or other surface obstacles. After falling twice in 500 meters, he decided to call it a day, and made camp once again.

It is clear that Faysal is starting to feel frustrated. He had intended to kite ski to the Pole, but without wind, his plan has not come together as he had hoped. As a result, he still has hundreds of kilometers to go before he is done, and the deadline for the season is closing fast. To make matters worse, he still hasn’t raised all of the money he needs to get a return flight off the continent. According to ExWeb, he has set up a fund raiser page here to do jus that. He needs to come up with 3000 euro ($3530) in order to get a flight back to South America.

Newall Hunter wrapped up his solo expedition to the South Pole last week, but he isn’t done with the Antarctic just yet. He has since moved over to Mt. Vinson, where he has already climbed up to Camp 2 in his attempt to summit that mountain. If the weather holds and he is feeling physically fit enough, a summit bid is likely by this coming weekend.

Finally, Are Johnson and Stéphanie and Jérémie Gicquel took a rest day yesterday as they geared up for their final push back to the coast. They have already skied to the South Pole, and are now on their return journey back to Hercules Inlet. They now have 14 days to wrap up their expedition, and still have 570 km (354 miles) left to go. That means they have to ski 40 km (24.8 miles) each and every day just to get to their end point on time. That’s a tall order, particularly when they are already exhausted, and they have not been hitting those distances with consistency in recent days. Hopefully the rest day will give them the energy they need to cover the final portion of their journey.

January 28 is the absolute last day to catch a plane out of the Antarctic. If the teams have not finished by then, they will have to be picked up where they are at, and taken off the ice. That leaves them just two weeks to finish. The clock is ticking, and for several of these explorers it is going to be a tough push to the end.