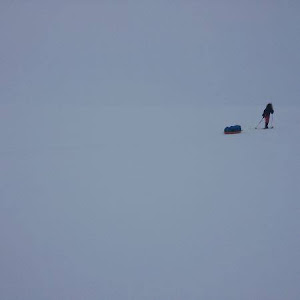 Yesterday I noted that the final Antarctic ski team had reached the finish line at Hercules Inlet after skiing for 74 days straight. Stéphanie and Jérémie Gicquel, along with guide Are Johnson, had set out from the Ronne-Filchner Ice Shelf back in November and had managed to traverse the Antarctic continent via the South Pole. By the time they wrapped up their journey yesterday they had covered 2045 km (1270 miles), pushing through the last 45 km (28 miles) in a grueling 18 hour dash to the end. The trio had been racing against the clock to catch the last plane out, and fortunately they had made it just in time.

When they reached Hercules yesterday the trio of skiers were exhausted, weak, and hungry. Low on supplies, all they could do was crawl into their tent, rest, and wait for a plane to come pick them up. That happened earlier today when they were plucked from the ice and flown safely back to the camp and Union Glacier. According to their final dispatch they arrived just in time to enjoy a fine pancake breakfast. Something I’m sure was greatly appreciated.

Stéphanie, Jérémie, and Are now await a flight back to Punta Arenas, Chile, which will bring an end to their Antarctic adventure. That flight could come as early as today depending on weather conditions. Their departure from the frozen continent will bring an end to the current season there, as the weather will now take a turn for the worse, making travel impossible. But as I write this, other explorers and adventurers are already planning for the next Antarctic expedition season, which will get underway in November of this year.

The 2014 season was a relatively quiet one compared to recent years. But still, there were some terrific milestones achieved. In addition to the impressive traverse from this trio, we also saw Frédérick Dion kite-ski to the Pole of Inaccessibility before continuing on to the South Pole as well. Frédérick would eventually traverse the continent too, using the wind to pull him along. Equally impressive was Newall Hunter’s efforts in the Antarctic. He managed to complete a solo-ski to the South Pole before heading over to Mt. Vinson to summit that peak while he was in the neighborhood. Not a bad effort on his part either.

Now, the curtain falls on the 2014 season and we’ll turn our attention elsewhere. It is a bit of a quiet time in the world of outdoor adventure, but the spring Himalaya climbing season looms, and it should be a good one.