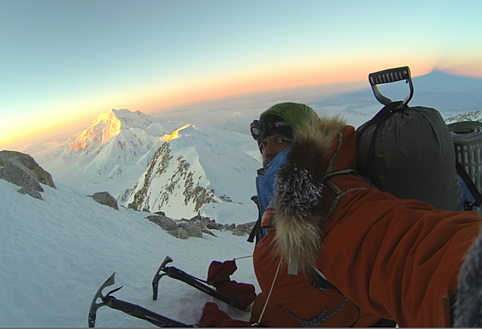 The winter climbing season is barely underway, and we already have our first successful summit of the new year. Yesterday, polar explorer and mountaineer Lonnie Dupre reached the top of Denali in Alaska, bringing an end to his quest to climb the highest peak in North America in January, the coldest, harshest month of the year on that mountain.

On Saturday, Lonnie’s home team updated his status indicating that he had reached 17,200 feet (5242 meters) on the mountain, which would put him within striking distance of the 20,237 foot (6168 meter) summit. Better yet, the weather forecast indicated that a period of excellent weather would cover the area for the next few days, creating the best summit window that Lonnie has seen during his winter visits to the mountain. It is not uncommon for temperatures to drop to -50ºF/-45ºC on Denali in January, and winds can blow at speeds of over 100 mph (160 km/h). In the past, those conditions have prevented him from summiting, but that wasn’t the case this time.

Yesterday another update was posted to Lonnie’s website, this time indicating that the team had received a SPOT GPS signal from the summit of the mountain. Lonnie had reached the top at approximately 2:08 PM local time, and while I’m sure he took a little time to enjoy the view, he was soon heading back down the mountain. Another SPOT update later in the day indicated that he has descended back to his high camp at 17,200 feet, where he is likely still resting now. He’ll continue his descent today, and will likely be off the mountain in a few days, provided the weather continues to hold.

The successful solo-summit of Denali brings an end to a quest that Lonnie has been on for the past five years. This was his fourth attempt at climbing the mountain in January, and this time all of the variables came together in a proper fashion. Hopefully the weather will cooperate for just a bit longer, as the decent can be a treacherous one as well. He won’t breathe easy until he has made it safely back to Base Camp. From there, he can call in a flight to come pick him up, and the celebration can truly begin.

Look for Lonnie to post his summit report once he is safely off the mountain and back in BC. I’m sure he has plenty of good insights to share.

Congratulations to Lonnie on completely this challenge. Get down safely!