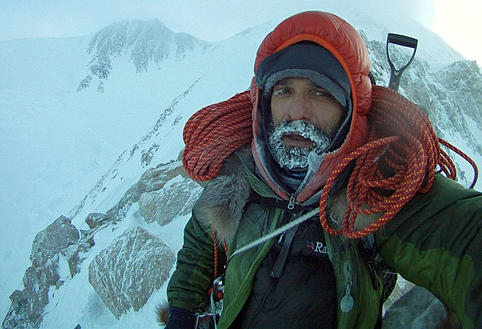 We’re barely two weeks into 2015, and it has already been an historic year for winter climbing. With Lonnie Dupre’s successful summit of Denali, he has now become the first person to climb that mountain solo in the month of January when it is the coldest, harshest days of all. Meanwhile, over in Pakistan, the three teams currently on Nanga Parbat have pressed forward, while a fourth squad continues to try to clear logistical hurdles.

We’ll start with an update from Denali. After reaching the 6168 meter (20,237 ft) summit this past weekend, Lonnie was able to make the descent back to Base Camp with little difficulty. Retrieving his gear as he went down, Dupre managed to return to BC on Wednesday, where he had hoped for a quick airlift back to Talkeetna to start his celebration. Unfortunately the weather didn’t cooperate, and even though two planes took off to retrieve him and his gear, neither of them were able to land Kahiltna Glacier due to high winds. With the mission to retrieve him aborted, he was forced to settle into his tent for one more night and wait for calmer weather.

Yesterday, the conditions were much more conducive for the aircraft, they were able to land and retrieve the mountaineer/polar explorer from his chilly campsite. Lonnie is now safely back in Talkeetna, where he is thawing out and relaxing, while enjoying sharing his tales of the climb with the locals. His website promises more updates on the summit push, as well as video from the ascent too. Stay tuned for that post, as I’m sure it’ll be quite the tale.

Over on Nanga Parbat there seems to be a bit of a drama brewing between Italian climber Danielle Nardi, and his campmates Tomek Mankiewicz and Elisabeth Revol. Tomek and Elisabeth departed Base Camp a week ago to establish several higher camps, and have apparently decided that they are now going to attempt to push up towards the summit. They have made this decision without consulting Danielle or without being in communication at all, as they are traveling with just a satellite phone. In a post to his website, Nardi has said that the cooperative expedition is now over due to this lack of communication between the teammates, although he says he will continue to provide support for Tomek and Elisabeth out of a sense of obligation for their safety.

It seems that the trio of climbers had planned on working more closely with one another on their eventual summit bids than was previously thought, and now Danielle feels that he has been left out of those plans. The lack of updates from Tomek and Elisabeth – who refused to take a radio with on their ascent – has left Nardi to read about the duo’s progress on the Internet, rather than hearing directly from them. Considering they had planned the project together, it now seems as if he is the one who has been left behind.

As for their part Tomek and Elisabeth have now established Camp 4 at 7000 meters (22,965 ft) amidst fluctuating weather conditions. High winds have been buffeting the mountain over the past few days, although very little snow is reported on the Diamir Face. The forecast is expected to improve over the weekend however, and the two climbing partners may take the opportunity to move up even higher. So far, they are happy with their progress and can see a good line to the summit, but the blisteringly cold conditions are making it very tough. (Update: It now appears that the two climbers will go down from Camp 4 to BC. How this will impact future plans remains to be seen.)

On the Rupal side of the mountain, the Russians team of Nickolay Totmjanin, Valery Shamalo, Serguey Kondrashkin and Victor Koval have started their second rotation up the mountain. They had been back in BC at the beginning of the week where they were resting and waiting out the weather. On Wednesday they started back up the mountain but there have been few updates on their progress ever since. Presumably they are heading put to stock Camp 2 and possibly press on to C3 as the weather permits.

Finally, ExWeb is reporting that the Iranian team that had hoped to be on Nanga by now has hit a snag with Pakistani immigration. Apparently there have been some issues with their visa, and the squad is trying to work through the situation so that they can proceed with their expedition. Hopefully they’ll get over those bureaucratic bumps soon, and can proceed to Base Camp.