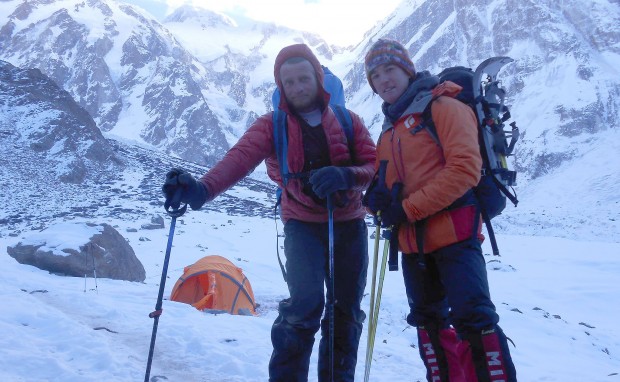 Sad news from Nanga Parbet today, where it has been revealed that Tomek Mankiewicz has suffered a serious injury, and must now abandon his attempt to complete the first ascent of that mountain in winter. But as he prepares to depart, two other teams will now arrive as the busy season on that mountain continues.

When last we checked in, Tomek and his climbing partner Elisabeth Revol were descending after spending ten days at altitude on the mountain. The duo had gone as high as 7800 meters (25,590 ft), and had established several high camps. For a time, they had even flirted with launching a summit bid, but exhaustion set in, so they made the wise choice to descend back to Base Camp to regain some strength.

They were expected to arrive back in BC yesterday, but along the way an accident occurred. The two climbers encountered a snow bridge on the way down, and while Elisabeth was able to cross over without incident, the bridge collapsed under Tomek, dropping him into a crevasse. He reportedly fell 50 meters (164 ft), braking some ribs, and fracturing his leg, in the process. Elisabeth was able to help get him out of the crevasse and make his way down, but the expedition is now over for the Polish climber who is luck to be alive. It is unclear at this time whether or not Elisabeth will join another team or return home as well.

Daniele Nardi is also back in BC after making a brief climb up the Mummery Rib. He is wrapping up his acclimatization efforts and is now preparing to go higher up the mountain as well. There is no time table yet on when he’ll push up the Diamir Face, but it is possible that he and Elisabeth will now join forces, as the two have climbed together in the past and know each other well.

Meanwhile, ExWeb is reporting that the Iranian team of Reza Bahadorani, Iraj Maani and Mahmoud Hashemi has sorted out their issues with Pakistani immigration and will finally receive their entry visas into that country. That will allow them to make their way to the mountain at long last, where they’ll begin their attempt from the Diamir Face as well. They are expected to reach Base Camp by the end of the week.

Finally, Alex Txikon, along with climbing partners Muhammad Ali “Sadpara” and Muhammad Khan are now enrollee to Nanga Parbet Base Camp as well. They are also expected to arrive on the mountain before week’s end. You may recall that Alex was scheduled to climb K2 this winter, but was forced to cancel when the Chinese revoked the team’s climbing permit at the last moment. He has now decided to switch focus, and is hoping for a winter ascent on this 8000-meter peak instead.

That’s it for now. More soon!