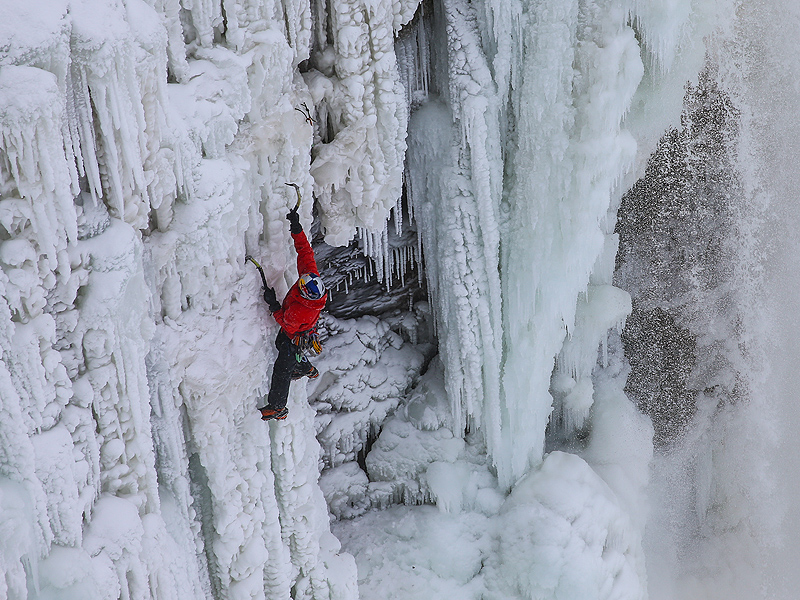 Last week, acclaimed climber Will Gadd, along with Sarah Hueniken, made a daring first ascent of Niagara Falls, the massive waterfall that sits on the border of the U.S. and Canada in upstate New York. Gadd has hoped to keep his project secret and to reveal the accomplishment this week instead, but an inquisitive reporter spotted him scouting the route and broke the story early. The result has been a bit of a media frenzy over the accomplishment, which was no doubt spurred on by public interest in Tommy Caldwell and Kevin Jorgeson’s Dawn Wall ascent.

In an interview posted at National Geographic Adventure, Gadd says that while he has accomplished thousands of great ice climbs in his career, this one was special. While he did have the permission of the New York parks department to attempt the climb, Niagara has been off limits for a long time. That gave it a bit of a “forbidden fruit” element that he couldn’t resist.

Gadd goes on to say that the idea for climbing the massive falls 51 meter (167 ft) falls came a year ago when the so-called “polar vortex” put much of the U.S. and Canada into a deep-freeze. The falls were frozen solid at that point, but knowing that it was illegal to make the climb, he decided to wait and go through the proper channels. Red Bull also approached him to sponsor the climb as well, which helped to open the doors.

In terms of the ice that he dealt with on the ascent, Gadd says that it was unlike anything else he’d every gone up before. Most of the time ice forms on a waterfall from the top down, but on Niagara it forms from the side. This is due to the amount of mist and spray that is generated from water plummeting over the top. The result of this unusual phenomenon is an uneven and irregular climbing surface that is very different from other ice climbs.

According to Gadd, Niagara offers “world-class ice climbing” but says he felt more pressure in getting the climb right in terms of doing it legally and safely than he did in actually completing the ascent. He sees this as an opportunity to potentially open the Niagara area for future climbs as well, and felt it was important to get it right for the climbing community.

The interview touches on a number of other topics as well, including the special gear that Will created to assist in the climb, why he is compelled to do “extreme” things, and why he isn’t an adrenaline junkie. It is definitely a good read all around.

Congratulations to Will and Sarah on this impressive climb.

1 thought on “Will Gadd Makes First Ascent of Niagara Falls”