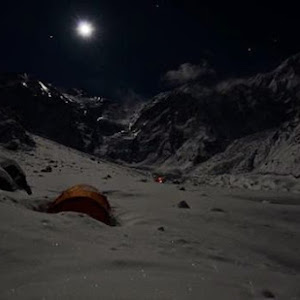 There is more news from Nanga Parbat today, where the climbers have started to make some progress once again after being stalled out by the weather. Better yet, it seems that all of the remaining teams have now joined forces, and are working together to try to reach the summit for the first time in winter.

Earlier in the week, Italian climber Daniele Nardi had gone as high as 6100 meters (20,013 ft) on the Mummery Rib. He had hoped to solo that section of the climb and potentially make a summit bid. But unstable conditions on the mountain made it unsafe to continue up out of fear of avalanches. This forced Daniele to return to Base Camp to rethink his strategy, although he didn’t stay there for long.

Apparently Daniele has decided to abandon his own plans and join the other teams that are currently on the mountain. In fact, he has already gone back up to Camp 2 with Spanish mountaineer Alex Txikon. They were joined by Pakistani climbers Muhammad Ali “Sadpara” and Muhammad Kahn, and together the team was able to establish Camp 2 on the Kinshofer Route at 6100 meters. The entire squad is hoping to continue up to Camp 3 today as they continue to fix ropes and shuttle gear.

Meanwhile, the Iranian team that is on the same route attempted to take a more direct route to C2 but were unable to complete that section of the climb. ExWeb reports that they were forced to turn back and ended up in Base Camp. Presumably they will attempt to go back up to C2 as well as they continue their acclimatization efforts.

This newly combined team is now as strong as any that we’ve seen on Nanga Parbat this year, and could potentially lead to the first winter ascent. We’ll have to wait to see if they’ll be able to work together to reach the top, but there is a great deal of experience and skill in place. There is no question that this group can summit, provided the weather cooperates and allows them to. Like the climbers themselves, we’ll have to wait to see if that happens.

Finally, Italian climber Simone Moro has revealed his Himalayan climbing plans at last. After teasing us for the past couple of months, Moro has revealed that he and Tamara Lunger will be attempting to summit Manaslu. ExWeb says that more details will be forthcoming but the plan is to apparently link Manaslu East (7992 meter/26,220 ft) with the Main Summit at 8163 meters (26,781 ft). He is expected to hold a press conference today to share further details.