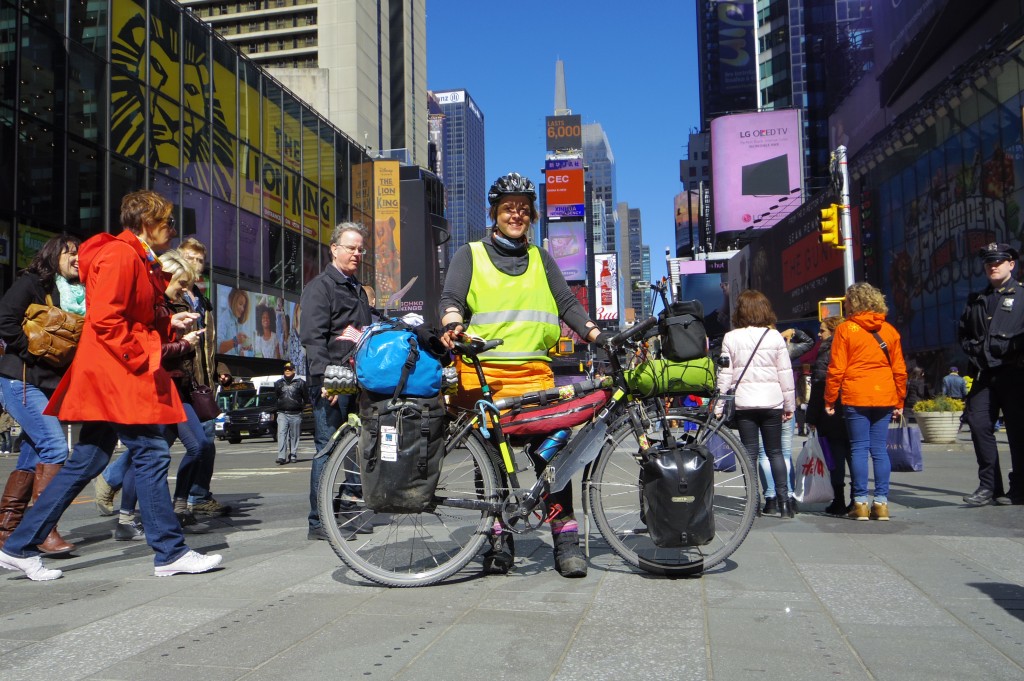 It has once again been far too long since we checked in on Sarah Outen, the British adventurer who has been making her way around the planet completely under her own power. Since my last update on her progress, she has completed a six-month long cycling journey across Canada and the U.S. – much of it in winter – and is now preparing for the final stage of her journey, a crossing of the Atlantic by rowboat.

You may recall that Sarah launched her London2London via the World expedition four years ago by first paddling down the River Thames in London, and then across the English Channel to France. From there, she then proceeded to ride her bike across Europe and Asia, encountering many interesting people and adventures along the way. Eventually she arrived in Japan where she intended to cross the North Pacific by rowboat. That was back in the summer of 2012, and soon after she embarked on that ocean crossing she encountered a nasty storm that damaged her boat, and sent her back to shore. Undaunted, Sarah returned a year later and rowed from Japan to the Aleutian Islands in Alaska. Then, last year she kayaked through the islands to the Alaskan mainland, where she returned to her bike for a long ride across North America.

On March 15, Sarah rode her bike into New York City, essentially wrapping up the final cycling portion of her journey. She will eventually tack on another 400 miles (643 km) to the ride when she heads for Cape Cod in a few weeks, but for now she is enjoying some time in NYC, where she has been catching up with old friends, making new ones, and starting to prepare for the next stage of her grueling journey.

In May, Sarah will set out across the North Atlantic in her rowboat. The plan is to cross the ocean and row back up the Thames, passing under the London Bridge, which was her official starting point those many long months ago. If everything goes as planned, the Atlantic crossing should take roughly 4-5 months to complete, putting her back home in London sometime in the fall of this year.

While the journey has taken longer than Sarah had anticipated, it has been quite the experience and challenge. Circumnavigating the globe completely under her own power is an impressive accomplishment, and now just the Atlantic Ocean stands in the way of her achieving that goal. Outen is no stranger to ocean rowing however. In addition to having rowed across the North Pacific, back in 2009 she also rowed solo across the Indian Ocean as well. When she launches her Atlantic crossing in May, it’ll feel like old times I’m sure, although this time she’s heading home.

Over the next few weeks, Sarah will be dealing with logistical issues, resting, and getting her boat ready for launch. The weather needs to improve and stabilize before she begins rowing the Atlantic, but by mid-May or so she should be about ready to go. There are still thousands of miles of ocean ahead of her, but London is calling and the journey is nearing an end at long last.