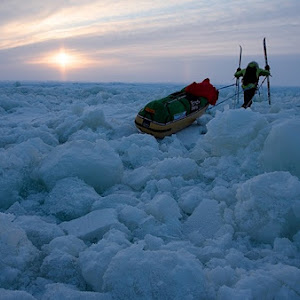 A few weeks back I wrote a piece lamenting the lost season in the Arctic. With Kenn Borek Air withdrawing support for expeditions traveling on the Canadian side of the ice, it seemed that there would be very little to report this season. While that remains largely true, ExWeb is reporting that one lone skier will take to the ice, and attempt to cross the Arctic this season after all.

Swiss explorer Thomas Ulrich is preparing to leave for the North Pole soon, where the’ll begin his latest adventure. Throughout his career, Ulrich has traveled to in some of the coldest environments on Earth, having made expeditions to the Southern Patagonian Ice Caps Franz Josef Land in the Arctic Ocean, Greenland, and more. But now, in preparation for a major undertaking scheduled for 2016, he’ll travel to the North Pole to attempt a crossing of the Arctic north to south.

Ulrich will first travel to the Barneo Ice Camp, which is currently being built at 89ºN. From there, they’ll catch a helicopter ride to the top of the world, where he’ll launch a solo ski journey south into Canada, covering approximately 800 km (500 miles) in the process.

As the only explorer in the Arctic this season there are questions about how Ulrich will receive support if he runs into trouble. But ExWeb says that while the Swiss adventurer is closer to the North Pole he’ll be covered by the Russian team at Barneo. As he moves further south, Kenn Borek will apparently provide logistical support and emergency evacuation if it is needed. Where exactly that coverage begins remains a bit uncertain, and it seems likely that Thomas could find himself alone, in no-man’s land, without proper support if he isn’t careful.

Ulrich is scheduled to fly to Barneo on April 3, and launch his Arctic expedition soon there after. Traveling south from the Geographic North Pole isn’t quite as dangerous or difficult as going north, but it is still an incredibly challenging undertaking. It’ll serve as good practice for next year however, which is when the explorer hopes to attempt a complete traverse of the Arctic on foot via 90ºN. That journey will cover more than 2000 km (1242 miles) starting at Point Cape Arktichesky in Russia and ending on Ellesmere Island in Canada. Thomas believes it will take him 90-100 days to complete the crossing, which he will make solo and unsupported.

For my money, a crossing of the Arctic Ocean remains the most difficult challenge in exploration and adventure. Making a full traverse of that ocean will only add to that challenge. Watching how Thomas does this season should give us an indication of that next expedition will proceed as well. You can bet I’ll be following his journey in the days ahead. It will be an interesting adventure to watch unfold.