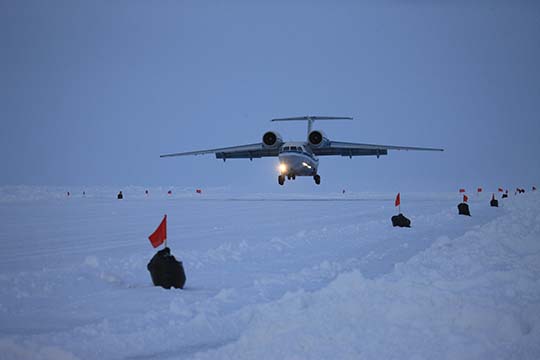 The weather has improved somewhat around the Barneo Ice Camp, allowing some flights to resume to the temporary Arctic base at long last. Meanwhile, the first team of skiers has reached the North Pole, even as another group waits patiently to begin.

Russian AN-72 aircraft have resumed their regular supply runs to the base, which is located at 89ºN in the Arctic Ocean. Yesterday some much needed fuel and food was delivered, along with a new group of visitors mostly consisting of researchers and members of the media. Later in the afternoon, some of the camp’s occupants even stretched their legs with a spirited game of football (soccer) as well.

In other positive news, the first “last degree” ski team reached the North Pole yesterday. The group was led by guide Miroslav Jakishev, and after spending a brief time at the top of the world, they were gathered up by helicopter and returned to Barneo. They’ll likely spend a day or two there before starting their journey home, depending on weather and the arrival of more flights.

There was some bad news for the skiers however, as one man on team being led by David Hemplemam-Adams had to be pulled from the ice due to frostbite. While details remain slim, it seems the skier contacted the affliction in his fingers while on his way to 90ºN, and had to be evacuated before the situation got worse.

Meanwhile, another group of North Pole skiers – that includes guide Thomas Ulrich – is still stuck in Longyearbyen and waiting for flights to resume from there. Ulrich will lead the squad to their goal, and then bid them farewell as he launches his attempt to ski to Ellesmere Island on the Canadian side of the ice. The Swiss explorer will be the only Arctic skier this season, going it alone on his route. This will serve as training of sorts for his attempt to traverse the Arctic entirely next year.

The Ice Camp is likely to stay open for about another two weeks or so, helping to facilitate travel to and from the Arctic in the process. This season has been somewhat of a quiet one with more researchers and military personnel traveling to the region rather than adventure travelers and explorers. Still, there will be more news to come from the North Pole in the days ahead, particularly as Ulrich gets underway.