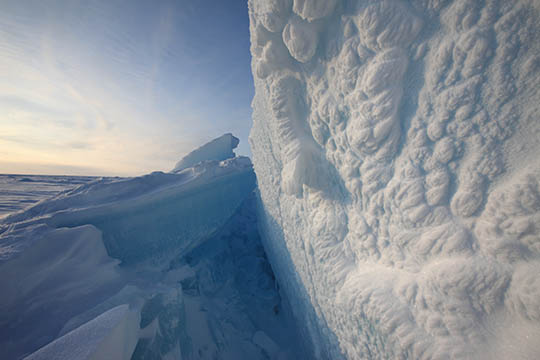 The Arctic expedition season is starting to get back on track now that normal flights have resumed out of Longyearbyen in Norway. The Russian AN-74 aircraft was able to finally start delivering passengers and supplies to the Barneo Ice Camp yesterday, and while some travelers were delayed by a few days, they are now quickly getting back on schedule.

The base itself was happy to see the flights resume, as it meant some much needed fuel, food, and other supplies were delivered at last. While they crew, researchers, and media that are currently at the base were in no real danger, their life on the ice flow will be much more comfortable now that they are getting all of the gear and food that they need.

Several last degree ski teams arrived at the camp yesterday as well, and immediately began their journeys to the North Pole. Amongst them is Thomas Ulrich, who will lead a commercial group to 90ºN before he begins his own solo journey to Ellesmere Island on the Canadian side of the ice. Presumably his group was one of them that set off yesterday, as they have some ground to make up due to the delay.

The North Pole Marathon was also delayed due to the lack of flights, but the first competitors were shipped to Barneo today, and will soon begin running there as well. The race is considered to be one of the more challenging marathons in the world due to the ice, snow, and extreme cold, as well as the occasional encounter with a polar bear.

The skiers competing in the Marmot Cup race that I posted about yesterday should be en route to Barneo today too. They’ll spend a couple of days training together near the camp before they set out on April 15 on a last-degree race to the top of the world. The delayed flights hasn’t impacted their schedule much at all, and they are on track to begin this unique competition as planned.

While this is a lot of activity taking place in the Arctic, it still feels a bit empty compared to years past. With no major ski expeditions to the North Pole to follow this spring, it is relatively quiet in terms of explorers pushing the boundaries. While the last degree teams are worth nothing, they are commercial squads filled with travelers who have spent a lot of money for the privilege of being able to go to 90ºN. Don’t get me wrong, I’d love to be amongst them, but I am certainly missing the efforts of the full distance skiers who struggle mightily against the conditions in the Arctic. For my money, that journey remains the toughest in the world, and it is disappointing to see that it could be coming to an end.

Perhaps next year we’ll see some activity in the Arctic beside Ulrich’s epic adventure.