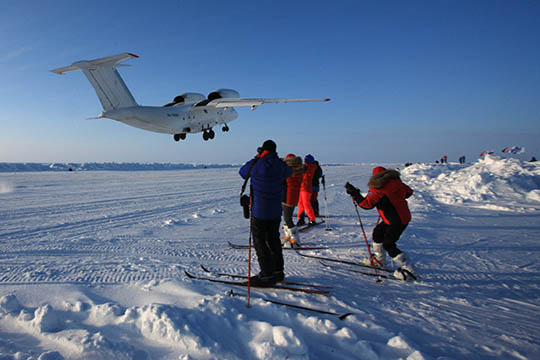 It has been a busy week at the North Pole, where the Bareno Ice Camp continues to serve as a temporary base for researchers, explorers, and adventurers. This year’s camp has been open for a couple of weeks now, which means it is nearing the end of its lifespan, but it will continue to see steady arrivals, and departures, until the Arctic season ends before the end of the month.

Work has begun to repair the aircraft that had its landing gear damaged upon arrival to Barneo back when the camp first opened. As you can imagine, that isn’t an easy task when you’re located just one degree off the Pole. The plane has obviously been out of commission for most of the season, and as a result the support flights out of Longyearbyen in Norway have been forced to use just one aircraft this year. Two flight crews have been aboard those flights, and that plane has been flying almost non-stop to deliver people, fuel, and supplies to base. Add in nearly a week delay in flights due to weather, and the crews have been struggling to keep up.

One of the biggest pieces of news to come out of Barneo in the past couple of days is that polar guide Thomas Ulrich has reached 90ºN with his team of clients. They has skied the last degree to the North Pole after starting out at the Ice Camp last week. Those clients were plucked from the ice by a Russian helicopter, and flown back to the base, where they then made their way home. But they said goodbye to Ulrich at the top of the world, as he will now proceed to ski solo to Ellesmere Island on the Canadian side of the ice. This expedition will serve as a tune-up for his even bigger plans for 2016, when he hopes to traverse the entire arctic – via the North Pole – completely solo and on foot.

The teams participating in the 2015 Marmont Cup race set off yesterday. They’re racing across the last degree to the North Pole, with 5 squads competing to become the first to reach that point. The all-women’s team led by Bettina Aller ran into some trouble yesterday however when one of their stoves wouldn’t work. A support team was dispatched to help them, and they are still on track to continue, but it was nearly a disaster for the squad before they really got underway. They are expected to arrive at 90ºN sometime late next week.

More last degree skiers continue to arrive at Barneo. Yesterday, three squads led by Borge Outland, Bengt Rotmo, and Dixe Dansercoer – each a polar legend – reached the Ice Camp. They’ll be making their way north in the days ahead too. If you’d like to see what this type of expedition is like, take a look at these photos from a team of Norwegian teenagers who recently completed their journey across the final degree.

Finally, ExWeb has a report on Christian Redi, who has just completed a free dive in the Arctic Ocean. According to the story, the air temperature was -30ºC/-22ºF when he plunged through a  1.6 meter opening in the ice, where the water temperature was a balmy -2ºC/28ºF. But Christian said it was the most beautiful experience he has had on dive. The water is 2000 meters (6261 ft) deep at the point he dropped in, and even though everything was dark, it was also very clear. The free dive took place near the Barneo camp, where a crew had cut the opening for him. The experienced free diver told ExWeb that it was one of the most meaningful dives of his career.

That’s all from up north. Still a busy time at Barneo, but only another week or two before it shuts down for the season once again.