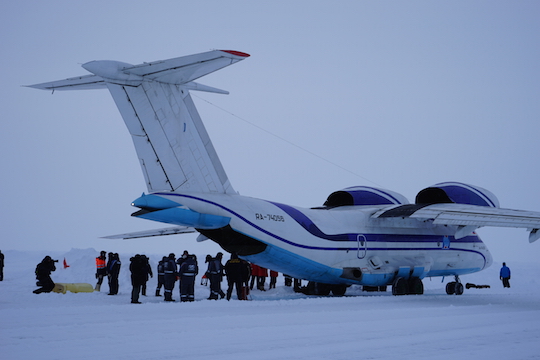 The 2015 Arctic season is underway, but it has been a difficult one already. As I reported yesterday, the Barneo Ice Camp opened this past weekend, but immediately ran into problems when one of the transport planes landed roughly on the ice, breaking its landing gear in the process. Replacement planes were obtained to help keep the flow of traffic to the temporary encampment flowing, but poor weather is keeping those flights grounded, and preventing researchers, skiers, and media from arriving onsite.

Two Russian-build Anatoly AN-72 aircraft were sent to a base in Murmansk to begin shuttling supplies, staff, and visitors to Barneo. Those planes were meant to pick up the slack for the damaged one that now sits on the ice at 89ºN awaiting repairs. But heavy snows and high winds over the Arctic Ocean prevented those planes from reaching the Ice Camp as scheduled. The aircraft were forced to turn around after encountering particularly bad conditions that included ice build-up and near zero visibility. Without proper signals from the ground to help lead the pilots to their destination, it would be incredibly difficult to land on a moving ice slab in the Arctic, so instead the flights returned to Murmansk and are waiting for the weather to clear before they try again.

Meanwhile, a group of “last degree” skiers is also stuck in Longyearbyen waiting for flights to resume to Barneo as well. They hope to get underway soon, as they’ll hit the trail for the North Pole as soon as they are on the ice. One of those groups will be led by polar explorer Thomas Ulrich  who will continue from 90ºN to Ellesmere Island in Canada. Ulrich will be the only skier in the Arctic this season as he trains for a potential full traverse of the Arctic Ocean in 2016.

For the most part, the visitors to Barneo this year are all scientists and climate researchers, with a few Russian military personnel that are training in the region as well. In years past there were more North Pole skiers, and the base served as a support station for expeditions traveling across the ice from the Canadian side. But since there is no one traveling in that direction this year, it will be a bit quieter at the top of the world.

The Ice Camp is built each spring in the Arctic to serve as a temporary base. It is typically open for about three weeks, facilitating travel in the region. This year Barneo is likely to remain in operation through late April.