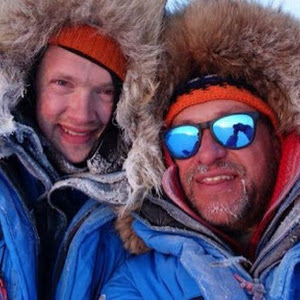 Last week I shared the sad story of Dutch Explorers Marc Cornelissen and Philip de Roo who had gone missing while conducting research in the Arctic. At the time, it was uncertain what had happened to the two men, although it was speculated that they may have fallen through the ice and drowned. Now, the body of one of the men has been recovered, providing some clues as to what might have happened.

According to ExWeb, a team of Royal Canadian Mounted Police conducted a dangerous recovery mission above the Arctic Circle in an effort to retrieve the body. It was later identified as being Cornelissen, and the cause of death was determined to be “drowned by hypothermia.” The body was found at the location where the explorers had set off an emergency beacon on April 29, but by the team rescue squads could get to that position a few days later they found only two sleds – one floating in the water – and a highly trained support dog that had been brought along on the expedition.

The dog was later rescued from the ice and returned home, and further investigation revealed the body of Cornelissen in the water. There was no sign of de Roo however, and it is believed that he suffered the same fate as his companion.

This latest news is sad of course, but it may bring a sense of closure for the two explorers’ friends and family. ExWeb says that Cornelissen’s body has been received by the Dutch embassy in Canada, and it is being transported home to the Netherlands soon.

This story underscores my feelings that the Arctic is an incredibly difficult place to travel, and remains one of the most dangerous environments on the planet. It is because of these challenges that we will see fewer people attempting to explore the Arctic in the near future. It is simply too hazardous to venture into that wilderness, and thanks to ongoing climate change, it is probably only going to get worse in the years ahead.