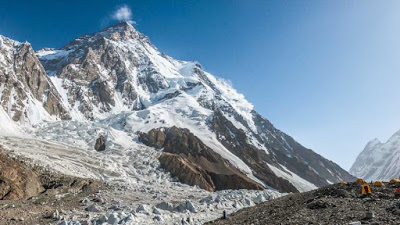 The summer climbing season in Pakistan is quickly coming to an end as numerous teams prepare to depart their Base Camps for the long trek home. It has been a frustrating year in the Karakoram, where deep snow and generally poor weather have prevented most climbers from achieving their goals. But it isn’t over just yet, and there are still a few teams in holding patterns, although their chances of success don’t look great at this point.

We’ll start today back on K2, where more teams have called it quits. Yesterday I noted that some of the big commercial squads had elected to pull the plug on their expeditions due to safety concerns high on the mountain, and today we learn that others have decided it is time to go home as well. They include the Swiss team of Mike Horn, Fred Roux, and Köbi Reichen, who were the first squad to arrive in BC this year. They made two attempts at the summit, and were turned back by heavy snow both times. They now feel that their best opportunity is behind them, and have begun preparing to start the trek back to Askoli.
The Swiss team isn’t the only ones who are leaving. The Seven Summits Treks commercial team is also preparing to depart as well, as is Philippe Gatta who announced on his Facebook page that he’ll hit the trail starting tomorrow. Essentially, just about everyone is now abandoning K2 Base Camp, which means there will likely be no summits on the mountain at all this year. That stands in stark contrast to the amazing summer of 2014 when more than 40 climbers stood on top of the “Savage Mountain.”
Over on Broad Peak, one day after abandoning their attempt to climb K2, the Himex team launched a summit bid early today, setting out for Camp 3 in light snowfall. Later that would turn into a full-blown storm, with heavy snow falling on the upper slopes of the mountain. The climbers attempted to wait out the storm, but as they pressed forward they found deep, unstable snow that convinced them it was time to turn back. Everyone is back in BC now, and the Himex expedition is over on Broad Peak too. The entire team is now preparing to leave.
There are still a few teams in Base Camp on BP that are waiting to see if they’ll get a chance to summit. The weather forecast into next week is not promising, but there is a chance that things will improve after that. The remaining squads are just holding on for a glimmer of hope, but at the moment it appears that there just might be only one summit on Broad Peak for the entire season.
Finally, ExWeb is reporting that efforts to locate a missing climber on Gasherbrum II has been called off. Polish mountaineer/skier Olek Ostrowski went missing this past weekend when he was descending from Camp 2 to Camp 1. He had been attempting to summit the mountain, and then make a ski descent, but bad weather forced him to turn back. It is believed that he fell into a crevasse on the descent, but all attempts to find him came up empty. Continued bad weather and deteriorating conditions have hampered any further efforts to find Olek, who is now believed to have lost his life on the mountain. My condolences to his friends and family.
That’s all for today. It is now safe to say that there won’t be many more updates from Pakistan this summer. The season is almost at an end, and it has been a difficult one to say the least. I’ll continue to monitor the situation on the ground there, but for the most part there will be few teams left to report on as of tomorrow.