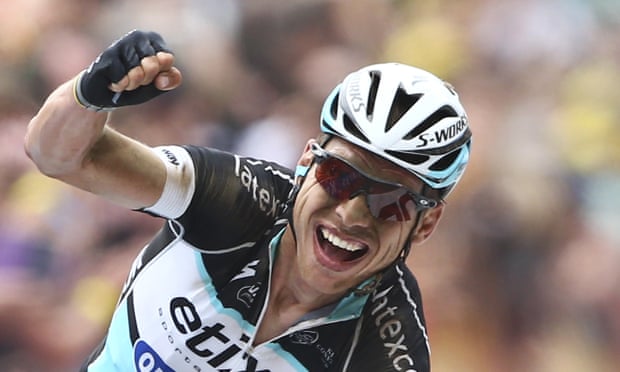 One of my favorite annual events got underway this past weekend when the 2015 Tour de France began with an individual time trial in the town of Utrecht, Holland. As is typical with Le Tour, the opening days have been filled with carnage and controversy that have already left its mark on the peloton.

As mentioned, Day 1 was an individual time trial that was most notable for the fact that it was won by Rohan Dennis of BMC. He managed to complete the entire 13.8 km (8.5 mile) course in under 15 minutes, which put him in the Yellow Jersey just ahead of Tony Martin and TT specialist Fabian Cancellara.

Heading into Day 2, the riders were anxious to head out onto the first real stage of the race. It was a 166 km (103 mile) route from Utrecht to Zélande that featured a sprint finish that was won by Andre Greipel. It was this stage that brewed the first level of controversy as Greipel, Peter Sagan, and Cancellara all beat sprinter Mark Cavendish to the line. As they approached, it appeared as if Cavendish stopped pedaling, indicating that he had given up going for the win, which allowed Cancellara to earn a high enough spot to get bonus time that would put him into the Yellow Jersey.

After the stage, the media and cycling fans tore into Cavendish for not going hard all the way to the finish line. Had he finished stronger, his teammate Tony Martin would have earned the maillot jaune. For his part, Cav turned on his lead-out man Mark Renshaw, saying that he went for the sprint too early, leaving him hanging out to dry and without enough power to complete the final leg. The infighting has already put a dark cloud over the Etixx-Quick Step team in the early days of the race.

Day 3 was a defining one for the 2015 Tour. It was a 159.5 km (99.1 mile) slog across the Mur de Huy in Belgium that brought some tough climbing to the early days of this year’s race. It was eventually won by Joaquin Rodriguez, but not before 2013 Tour winner Chris Froome grabbed the Yellow Jersey while out on the road.

The biggest news of the day was a massive crash that sent 20 riders to the ground and caused Tour organizers to suspend the race momentarily while the medical crew and cyclists worked to normalize the situation. When the dust cleared, several riders were forced to withdraw, including Cancellara who suffered a broken vertebrae in the fall.

Today, the race returned to France at last with a 223.5 km (138.8 mile) stage that took place between Seraing and Cambrai. The riders were forced to take on the infamous cobblestone roads of the north which always cause havoc on the peloton and their bikes. This was the case once again, with many cyclists having mechanical issues as they struggled to hang on with the lead group. On a day like today, most of the riders just try to survive, as the cobblestones have ended the Tour dreams of many of them in the past.

The hero of the day was Tony Martin however, who has languished in second place over the early stages of this year’s Tour. As the peloton approached the finish line with just a few kilometers to go, Martin took charge of the race and sprinted out ahead of the other riders. The time trial champion was able to hold off a late attack and reach the finish line first, claiming the Yellow Jersey at long last. Although he has no designs on actually winning the race, Martin wanted so badly to claim the maillot jaune, even for a short time. He’ll now take to the road tomorrow in yellow.

With this big win, Martin also holds the Green Jersey, while the White Jersey for the Tour’s best young rider goes Sagan. There haven’t been many climbing points up for grabs just yet, but the Polka Dot Jersey is currently on the shoulders of Thomas De Gendt.

Tomorrow, the peloton turns towards the Somme, a brutal scene of battle from World War I. The stage will be 189.5 km (117.7 miles) in length between Arras Communauté Urbaine and Amiens Métropole. It will be a sprinters stage once again, with the fastest men in the world lining up to take the win.

The Tour is just getting started. There is plenty of drama and competition yet to come.