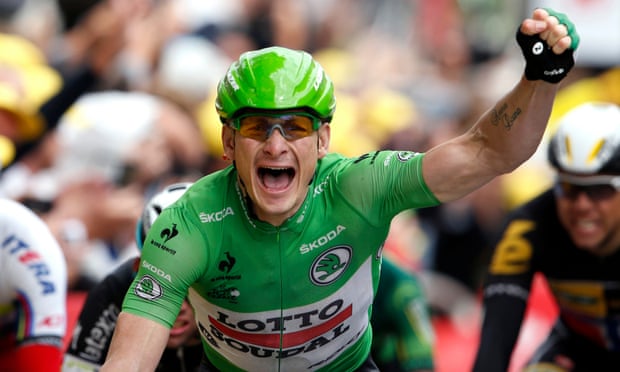 Today was a typical early stage of the Tour de France. It featured plenty of riding, less than favorable weather conditions, several nasty crashes, and a sprint finish that provided a level of excitement in the final few kilometers. It also did nothing to impact the General Classification standings, although the sprinters got to strut their stuff once again.

The 189.5 km (117.7 mile) stage ran from Arras Communauté Urbaine to Amiens Métropole was most meant to be flat and fast. But poor weather that included rain and high winds, kept speeds slower than expected and helped to cause the peloton to split, while also bringing about several nasty crashes.

The real fireworks didn’t begin until the riders lined up for a sprint finish. The top sprinters in the world made their way to the front of the pack to put themselves in position for a win, with the speed and intensity of the race rising dramatically in the final few kilometers. As the tempo increased to heart-pounding levels, riders like Andre Greipel, Mark Cavendish, and Peter Sagan went head to head for the stage victory. In the end, it was Greipel who made it to the line first, easily out pacing his rivals. Sagan and Cavendish finished second and third respectively.

It could be another controversial day in the media for Cavendish, as somehow he managed to lose the wheel of his lead out man Mark Renshaw in the stretch run. This didn’t put Cav in the best of positions to go for the win, even though he tried his best to make up for the slip. Whether or not he’ll find a way to throw his teammate under the bus again remains to be seen, but in the early days of the race, the relationship between the two riders has to be strained a bit.

At the end of the day, Greipel managed to add to his points total and hold on to the Green Jersey once again. Sagan also stays in white as the best young rider in the tour as well. The Polka Dot Jersey that goes to the King of the Mountains remains squarely on the shoulders of Joachim Rodriguez, although a few Category 4 climbs tomorrow may change that.

In terms of the GC, Tony Martin remains in Yellow and had no difficulty defending his top spot on the leaderboard today. There were no real chances for anyone to take the maillot jaune away from him, and he’s likely to continue holding on to it for a few more days. The real contenders for the win – including Chris Froome and Alberto Contador – are lurking not far back, and are simply waiting for the first stages in the Pyrenees to make their move. That will happen this weekend.

Tomorrow, the riders will take to the French roads once again as they tackle a 191.5 km (119 mile) stage that runs from Abbeville to Le Havre. This is once again a route that favors the sprinters, although a few climbs will add a bit of interest along the way. Look for the familiar names of Greipel, Sagan, and Cavendish to be fighting it out once again, although this will be a stage where a breakaway could conceivably survive. Now that would bring some interest to the early proceedings.