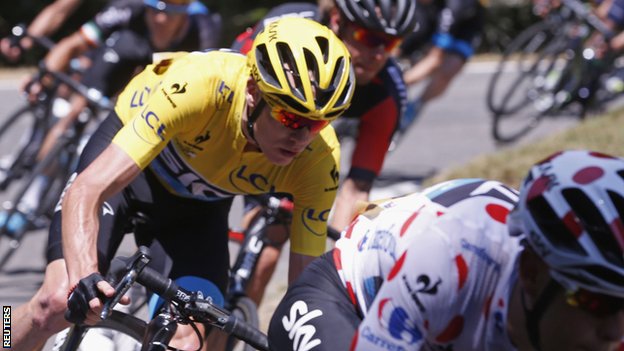 My very busy schedule over the past couple of weeks has made it more difficult than usual to keep up with what is happening with the Tour de France this year. While I have tried to watch as many stages as I can, there just hasn’t been enough time in the day to follow it as closely as I would like. That said, I have continued to stay abreast of the proceedings, and while I haven’t been writing detailed daily summaries as I have in past years, I’ve still been keeping a close eye on the race.

At the moment, the riders are in the Pyrenees where they are taking on the first major climbs of the year. Yesterday’s tough stage helped set the tone for what is likely to come, as Chris Froome, along with his Sky team, continue to look impressive. Froome was the odds on favorite to win the 2015 Tour heading into the three-week long race, and at the moment it is starting to look like no one will truly challenge him. After yesterday, the Kenyan-born rider from the U.K. only tightened his grip on the Yellow Jersey.

Froome’s closest rivals are American Tejay Van Garderen who sits 2 minutes and 52 seconds back, and Nairo Quintana Rojas who is holding down third place at the moment at 3 minutes, 9 seconds off the pace. Last year’s Tour winner Vincenzo Nibali is more than 4 minutes back, while Alberto Contador – this year’s other major contender – is holding down the sixth position over all and currently looks like he isn’t riding anywhere close to Froome’s level.

With his crushing riding in the first stage of the Pyrenees yesterday, Froome also took control of the Polka Dot Jersey that is awarded to the best climber in the race. He racked up quite a few points on his way to the stage win, and then went for more today on the ride up the Tourmalet. It is possible that he thinks he could pull off the rare double by taking home both the Yellow Jersey and the Polka Dot in the same year. Since he is currently holding both of those shirts, the Polka Dots were on loan to his teammate Ritchie Porte, who is second in the King of the Mountains classification at the moment.

The battle for the Green Jersey that goes to the top sprinter in the Tour de France has been an interesting one so far. Early on, Andre Greipel was cleaning up points in the category with stage wins and major points from intermediate checkpoints. But than as the race shifted locations, it was Peter Sagan who started to take charge. Now, the two men have been exchanging the jersey back and fourth between them, with just 7 points currently separating the two. Sagan has the jersey headed into tomorrows race, but whether or not he can hold on to it, and wear it on the ride into Paris, remains to be seen.

The White Jersey for the best young rider on the Tour is currently on the shoulders of Quintana, who has a more than 3 minute advantage over his closest rival in the category. While the Colombian rider would be happy to head back home in White, he still has designs on the Yellow Jersey as well, and will probably try to close the time gap that has opened between him and Froome.

Tomorrow is another very tough mountain stage. It is a 195 km (121.2 mile) ride from Lannemezan to summit of Plateau de Beille, which features a Category 2 climb, and two Cat. 1s before the mountain top finish that is rated as “Beyond Category.” It is believed that there could be attacks on Froome’s Yellow Jersey on that final climb, as Nairo Quintana looks to improve his position and put the lead back into striking distance before the riders temporarily leave the mountains behind.

The stage should definitely give us an indication of whether or not anyone can challenge Froome, or if he is destined to win his second Tour de France in three years.