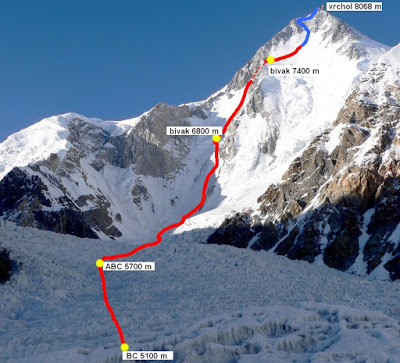 The Czech team climbing Gasherbrum I in Pakistan still hasn’t wrapped up its expedition, but they aren’t ready to quite give up yet either. The two climbers –  Marek Holecek and Tomas Petrecek – continue to wait patiently for a chance to summit, as the weather has prevented them from making much progress over the past few days. But there is a potential window in sight, and the duo are prepared to take advantage of it if they can.

ExWeb has posted an update on Marek and Tomas’ efforts. According to their most recent dispatches, the two climbers have moved up above 7300 meters (23,950 ft), but have been unable to make any further progress over the past few days. GI’s summit sits at 8080 meters (26,510 ft), so the team still has a considerable distance to go, but given a good weather window they could potentially finish the ascent and begin heading back down within a couple of days.

They just might get that weather window starting tomorrow. Forecasts indicate that conditions should start to improve over the next few days, potentially allowing them to launch their summit bid. If the weather doesn’t get better however, the duo will most likely be forced to retreat. When they set out from Base Camp on August 7 they had planned for a seven day climb. Now, ten days later, they’re likely starting to run low on food and supplies.

It has been a very long, and difficult, season in Pakistan this summer. While several teams have found success on Gasherbrum I and II, Broad Peak saw just two summits, and K2 turned away all challengers. Now, everyone except the Czech team has gone home. Marek and Thomas are hoping to wrap up the season in a successful fashion, but the weather must cooperate first.

Either way, we should have news about the ultimate outcome of the expedition in the next few days.